Rallies in Baranavichy and Brest: “Now we say: I can change everything!” 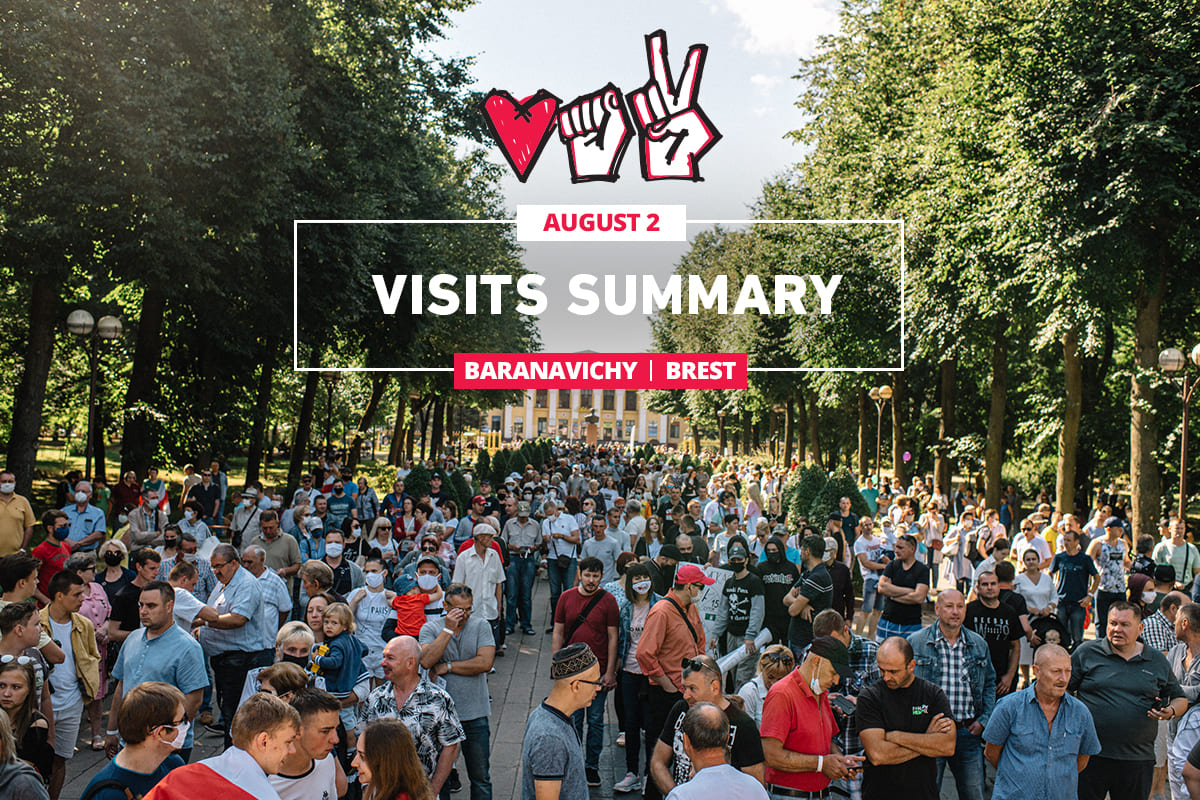 On August 2, two campaign events of Sviatlana Tsikhanouskaya were held in Baranavichy and Brest, with participation of Veranika Tsapkala and Maria Kalesnikava. Dear fellow
Belarusians, you are incredible!
Here are the key points from the messages the speakers delivered from stage.

It has become a regular everyday occurrence for us: this one got arrested, another one got detained, and their relatives are running around trying to find where their loved ones are being held. It is so painful and shameful that this has become the new normal for us. We need to put an end to it, and I promise you that in the new Belarus no one will ever have to suffer for the truth or for simply having an opinion.

I want to live in a country where no one is going to threaten to take away our children and send them to an orphanage. A country where we will not have to send our kids away just because we have a political voice or because their mother decided to run for president. I never want to see people who are just standing in line to express their civic position taken and thrown into police vans. I want to know the truth if a disaster has struck our country. I want Belarusians to know that we are going to overcome this disaster together. I do not want people to leave for other countries in search of a better life, I want them to stay and work for the good of our country. We have the most hardworking and smart people here. I am an ordinary person. I always get embarrassed when I see how you cheer for me, because I feel like I am just like you. Thank you so much for believing in me and for trusting me. And be sure that I will fight to the very end. I am with you and you are with me. Remember, my friends, that only together can we build the country to live in.

I adore Brest. I adore your city. Your city has become very special to the whole country, and you all know why. Because you set an example for all of Belarus. You, regular people, rose to protect your city, your children, your families from the threat posed by the construction of the battery plant. The whole country looks up to you with hope. Thank you for that, Brest! It is so baffling why people in a civilized state in the 21st century have to go out and protest every Sunday — for more than two years in a row now — in order to get the hazardous plant to be closed down! Why are people fined and arrested for it? Why cannot we decide for ourselves what our city should look like and what our country should look like?

Baranavichy, I have seen your monument to victims of the pandemic that took place a hundred years ago. Where is the monument to the heroes of the battle of today? The real numbers of coronavirus cases and deaths are concealed, doctors are treated with disdain, and no one has said a word of thanks to healthcare workers and volunteers who were out there fighting.

30% of companies in Baranavichy are unprofitable. More than 50% of the city economy are small- and medium-sized private enterprises. These are not “alternative facts”, this was reported on ONT state channel in 2019, when the president was visiting Brest. Instead of working with these enterprises and making them more efficient, the authorities attack and insult them. They do not praise your achievements, instead they try to hide their mistakes. The authorities can only threaten with prison, paint over grass, and shampoo the pavement when a visit of the current president is looming on the horizon.

We have to stop being afraid. We have to take responsibility for our future instead of waiting for someone else to come to the rallies while we sit quietly at home.

Any dictatorship is based on fear. We ask every policeman, every SWAT team member, every judge, every member of the election commission to be honest. We thank those who have already found strength to stand up to the demeaning system for their honesty.

We admire your courage and appreciate your actions. Many caring Belarusians are willing to offer support, training, a job to those who no longer wants to lie for a monthly salary of less than $200. Unlike the current government, we need honest and decent people.

On August 3, the current president is going to deliver his annual address to the Parliament and the people of the country. He calls it “a message to the people”, but in fact it is a message to the state officials who were appointed by him and who report to none other but him. Here is my first question to him: why doesn’t he come to this stage, right here in front of you, and tell you what has been achieved in the past in 26 years? He has removed the strongest candidates from the presidential race: Siarhei Tsikhanousky, my husband Valery Tsapkala, Viktar Babaryka. Do you know why he has removed them? Because he is scared of them, and because they would have asked him the same inconvenient questions to which, I believe, he has no answers.

You probably remember a very famous Belarusian film director Mikhail Ptashuk, many of you would have seen his film “In August of 1944”. I know it well and I like it a lot. I hope that this year Belarus will open a new chapter of its history, which is going to be called “In August of 2020”. So, when in future your children, your grandchildren, or even your great-grandchildren come to you and ask “Grandma, grandpa, where were you in August of 2020?”, I hope you will say — and you most certainly will say it! — “I was with the people, I was with Sveta!”