Rallies in Hrodna, Vaukavysk and Slonim: “We are a people who care how to live” 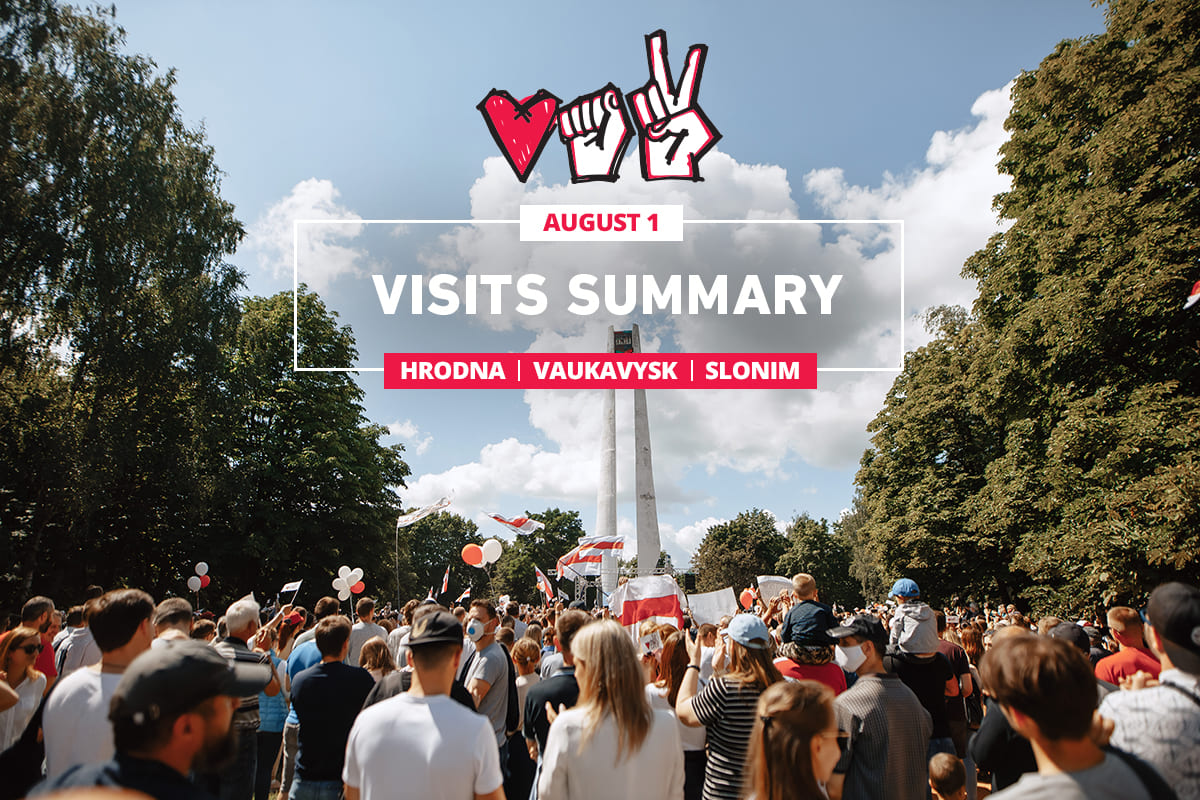 On August 1, Sviatlana Tsikhanouskaya along with Veranika Tsapkala and Maria Kalesnikova held rallies in Hrodna, Vaukavysk and Slonim! In each city we saw more and more people. Thank you! We are united, and we are the majority!
Here are the main highlights of the speeches.

The city of Hrodna has a great potential to become a prominent tourism destination. Your city is dear not only to Belarusians, but also to Poles and Lithuanians. And now I would have really liked to be talking about the beauty of your city, about cultural and national traditions. But it so happens that my own pain is connected with Hrodna. As you know, it was here, in Hrodna, the provocation took place during the picket to collect signatures. During this provocation my husband, Siarhei Tsikhanouski, and many of his other associates were detained.

I want to support independent journalists, media and bloggers. They are going through difficult times these days. They are arrested, their equipment is destroyed, they are beaten, they are persecuted just for showing our pickets online. They are punished for simply telling the truth. They are punished only because they dare to show Belarus, which is yearning for change.

My husband was not a journalist. He was an ordinary person who traveled around Belarus, and who began to communicate with people, giving them an opportunity to openly express what they think, and how they feel. He gave them the opportunity to speak the truth. The “Country for Life” YouTube channel became a breath of freedom for those people who wanted change. He was detained, thrown into prison. But it turned out that he had a wife who also wants change.

I’m not a politician, and I have no need for power. I don’t like it at all, to be honest, this word “power”. But, we are used to referring to our president as “power”. Although the power is in all of us, the power of each country is the people themselves. I do not need power, but since I found myself on this path, I could not betray my spouse, I could not betray people who believed in Siarhei, who believed him. And once I started this journey of collecting signatures, I realized that people were ready for change, people were ready to take responsibility for these changes. They demonstrated this by standing for hours in kilometer long lines to submit their signature. I understood that there is no turning back, we must only move forward and only towards victory.
We are here now, three strong women. But no matter how strong we may seem, we need you! Because all the power is in the people! All strength is in the people of Belarus!

I would like to appeal to all the state employees of Belarus. I think that you are modern day serfs. There are a huge number of highly professional people among you, you work well, you work great, but the pennies you get are not worth the labor costs, the energy that you put into your work. At the same time, you are constantly intimidated. You are intimidated by elections, you are forced to constantly falsify elections. You are not given any information about the coronavirus situation. The authorities did not take any measures to protect you in this situation. You are constantly driven to subbotniks and various events that no one needs. Are you afraid of losing this?

We see a large number of highly professional people among civil servants. All we need to do is to change the incentive system in the state apparatus, and then the civil service will become our friend, become our advisor and lend us a shoulder. And most importantly, we don’t need to be afraid anymore! Those times of fear should be a thing of the past. If you are alone, it may be scary. But look how many of us are here, look how many people are gathering in every city. And remember, they will never fire 50% or even 30% of people, because there will be no one left to work.

On TV we see reports boasting about collecting millions of tons of grain, but small towns and villages are dying out. The year of the small homeland is announced, but people leave these small homelands in droves, going to Warsaw and Moscow to work. This must end. People should enjoy life in small towns like they do all over the world. They should earn no less than in the capital and regional cities.

The west of the country and the Slonim region are ancient European cities with temples, castles, synagogues, and estates. For a long time, there was an opportunity to make this region a paradise for tourists and give local people an opportunity to earn money. Instead, for 26 years, the authorities have been collecting money for their toys: libraries and palaces in Minsk.

Every post, every conversation with a colleague, every activity and idea doesn’t go in vain. The whole world writes about us! They began to shoot programs about us, we are shown on the news. We are a people who care how to live. We thought for a long time that we were powerless, because we were taught to feel powerless. But the only thing that turned out to be the real strength is the strength we found in ourselves.