Rallies in Smarhon, Maladzechna and Lida: “Look around, everyone wants changes” 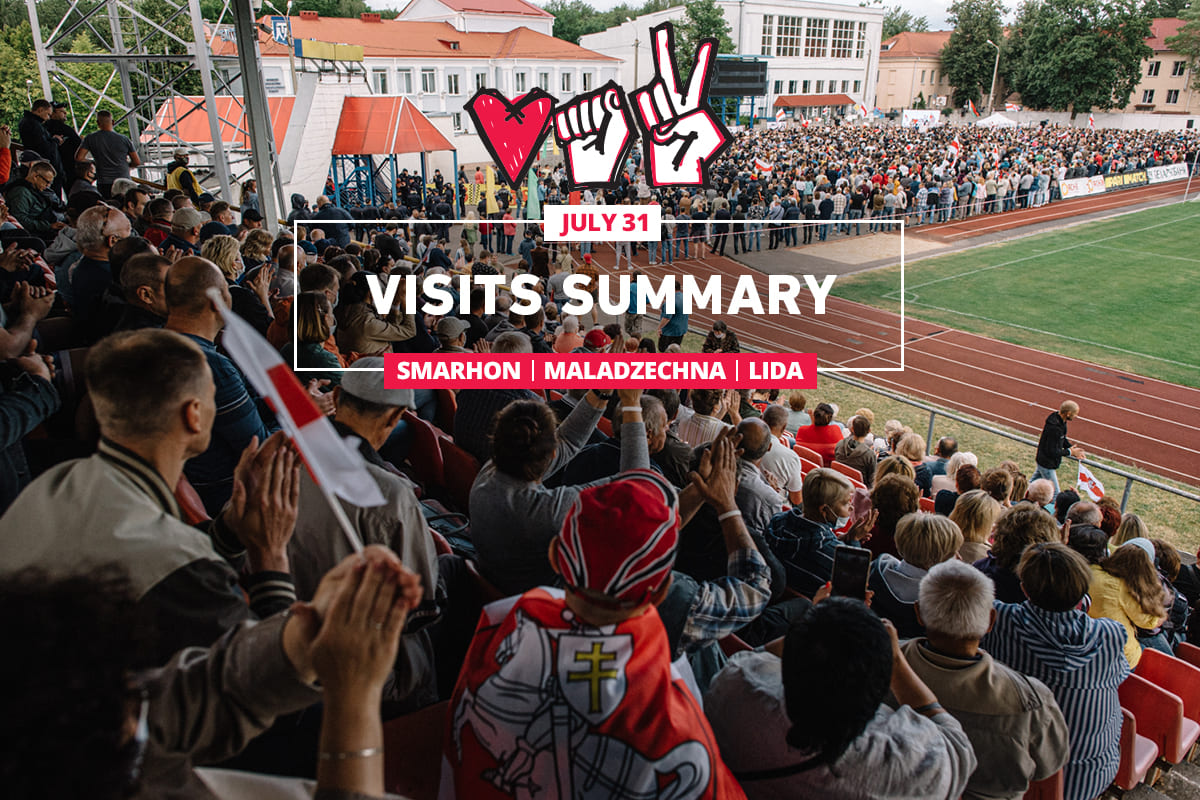 On July 31, Sviatlana Tsikhanouskaya’s rallies with participation of Veranika Tsapkala and Maria Kalesnikava took place in Smarhon, Maladzechna and Lida. We thank everyone who came! We are together and we have once agains shown how many we are!
We collected the main points of these rallies below.

When my beloved husband Siarhei Tsikhanouski travelled around Belarus, he made a stream from Maladzechna. I think some of those who were here then are here now, too. I see quite a lot of people. There were as many people in Minsk, as there are now here, in Maladzechna. It means brave people live in Maladzechna.

It was during that very stream from Maladzechna, when a young man spoke passionately about the situation in Belarus, namely about rudeness on TV. You probably remember: “My wife doesn’t pare, she has manicures done; my kid doesn’t wear a muzzle, he wears a face mask to feel safe at school where you made him go.” A lot of things were said that day. It was three months ago. And back then, people have already started to feel self-respect. We all have started to feel as one ready to support and help each other. Maladzechna, you were tough then, you are tough now!

Today I would like to address those people who are probably the hardest to reach out to. They would like to live in a different way, too. They, too, want changes somewhere deep inside. But they are not ready yet to talk about it openly. And they might not fully understand how wonderful the country after these changes can be. So, the first category of people I would like to address is our nice elderly people, grandmothers and grandfathers, fearing the change. But I want to explain. You think when a new President is elected, you won’t receive your pensions, right? My dears, it’s not the President who pays you your pensions, its your children and grandchildren. You earned those hard fought pensions. And when the new President is elected they won’t be less, they will be more. Because our retired elderly people are the priority, they are respected. Trust me, the new President won’t need palaces, airplanes with golden sanitary sinks. All the extra money available in the state will be given to you, who have worked for the benefit of the country. Don’t fear the change! Pensions won’t go anywhere, they will only rise. And you won’t have to choose between buying food or medicine. You will be able to buy presents for your grandchildren and you will be able to live worthily for the money you are paid. Don’t fear it!

The next category includes those who are, in my opinion, acting unwillingly, because the system is rotten: these are militia, riot police, internal affairs officers and all the security structures. By the by, many thanks to the militia for providing security today; it is very important! All these people we are usually angry with – the State Automobile Inspection officers stopping us, militia detaining us, riot police seizing the innocent people – they are all good people. They return to their families, they are loved by their wives, by their children. But since they are inside the system, they are forced to obey such orders. I don’t think they do it with a light heart. And our task for today, for now, for this significant time for our country is to support militia, riot police, officers inside the system. You should understand they have no respect to each other within these structures. An audio recording recently appeared on the social networks where we can hear how the administration treats their subordinates. They swear, they mistreat, they call them names. Do you think they enjoy being surrounded by this? They, in turn, take it out on the ordinary citizens. It happened so that in this system man is a wolf to a man. But aren’t you tired of such disrespect? Recall how it used to be: we used to say proudly “We are safe with our militia”. No one can say this now because the militia is rather feared, than respected. Guys, it’s dark and dirty within your system. Come out to the light!

The third category I would like to address and call to join the people are governmental officers and members of the district election commissions. You do understand that with your hands, evil things were done, your hands were used to falsify? So, this year, when you see that 97% of the people are in favour of the change will you take the sin upon your souls and falsify the election without hesitation? Look around, all these people around you want changes. And you should not justify with the fear of losing a job. We are all afraid, we are used to be afraid. But now is the time for each person to overcome fear. Don’t you think I’m afraid? My friends, I’m afraid every day! But I stand up, I summon all my willpower, I overcome my fear and I come to you, I go on, towards victory!

I also would like to thank our citizens abroad. They were forced to leave Belarus for some reason. But look how they all express solidarity with us this year. Look at all the solidarity chains across Europe: in England, France, Germany (by the way, one will take place in Germany on August 1), in Poland. Look what’s happening! So I speak to you, the Belarusians abroad. We see your support, we feel your support and we appreciate it!

We’ve had enough humiliation, rudeness! We’ve had enough of dividing our Belarusian people, people who have already been united, into ins and outs. All the outs get imprisoned for thinking differently. Is that normal?

Why should we vote for Sviatlana Tsikhanouskaya? Not only is Sviatlana a heroic woman, she is also our ticket for the happy and free Belarus. Sviatlana’s victory is the guarantee of our liberation. After Sviatlana wins this election, we will have the new fair election involving Viktar Babaryka, Siarhei Tsikhanousky, Valery Tsapkala and other alternative candidates. The election at which your vote will be counted, not thrown away.
Friends! You are unbelievable and you deserve a better life! Under no circumstances vote early. No one has the right to force you to do that. It is illegal!