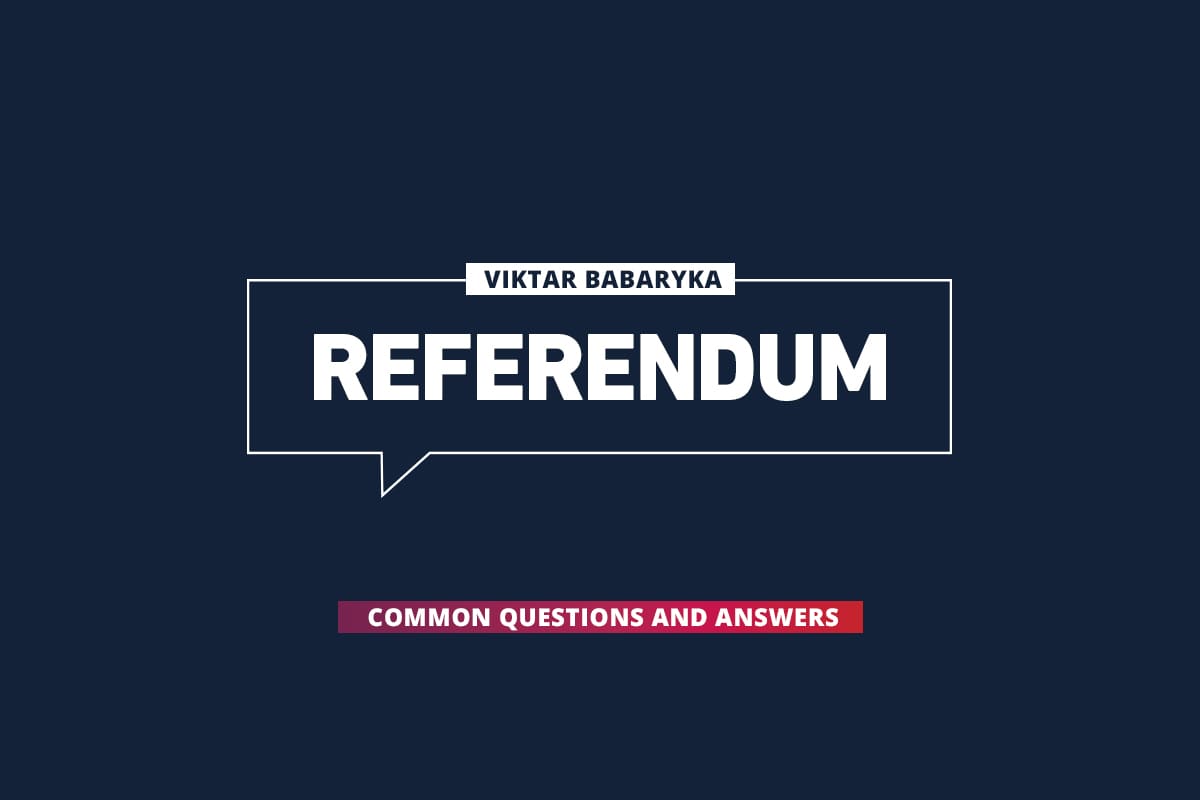 Our legal adviser explains everything you wanted to know about the Referendum.

During today’s live stream from Viktar Babaryka’s Electoral Headquarters, we gave some updates and answers to all the questions about the announced Referendum. We have reminded our viewers that they should be cautious and defend their rights using only legal ways, not falling for any provocations (there have been several Solidarity Actions held throughout the country recently, and you can find numerous examples of the public authorities’ reaction to them on social media). We have also underscored that our preparations for the Referendum do not take away from Viktar Babaryka’s presidential campaign. The campaign goes forward, but the period of electoral silence before the announcement of candidates’ registration makes it the perfect time to work on the Referendum proposal.

Here are the details on Why, When, and How the Referendum should be held.

Why is the Referendum necessary?

The current Constitution grants excessive authority to the President and allows the President to be elected for an unlimited number of terms. The President personally takes part in the assignment of all branches of government: judicial, legislative, and executive. According to Article 37, Presidential Decrees take precedence over national laws. This is fundamentally at odds with the idea of effective management that Viktar Babaryka stands for. Therefore, we suggest returning to the Constitution of 1994, which makes each branch of government independent and limits the number of presidential terms.

Why are we initiating the process now?

There are several reasons for this decision. Firstly, these changes are part of our candidate’s campaign pledges that he wishes to carry out immediately, irrespective of the election results. Secondly, the Referendum is a lengthy process (it takes from 1 to 5 months), so it should be initiated as soon as possible. Thirdly, it provides a further opportunity to hold rallies and explain to Belarusian citizens why a new Constitution is necessary. This is of primary importance during the times when we cannot carry on election campaigning. Rest assured that the elections remain our top priority, while the Referendum is a long-term goal.

What is the Referendum process and what are the challenges we can face?

The whole constitutional amendment procedure can be split into several stages. Here is what happens at every stage:

Precise wording of the proposal put up for the Referendum

We have already stated that a clear and concise proposal is essential. At the moment, we are putting a lot of effort into developing the proposal and will do our best to present our wording to you shortly. In the spirit of the law, the amendment will suggest a return to the Constitution of 1994, which provides for elections of judges of the Supreme Court of the Republic of Belarus and a limit to the number of presidential terms.

During his meeting with the members of the initiative group in Soligorsk, Viktar Babryka has promised that we will keep you busy. We are aware of the fact that our candidate is currently in detention. But it is time for the public to determine their own fate. The Referendum is the will of the people of Belarus. Let us express our will. Together we shall prevail!