Maxim Bogretsov — about the transit of the authorities, the leaders of opposition and own role in politics 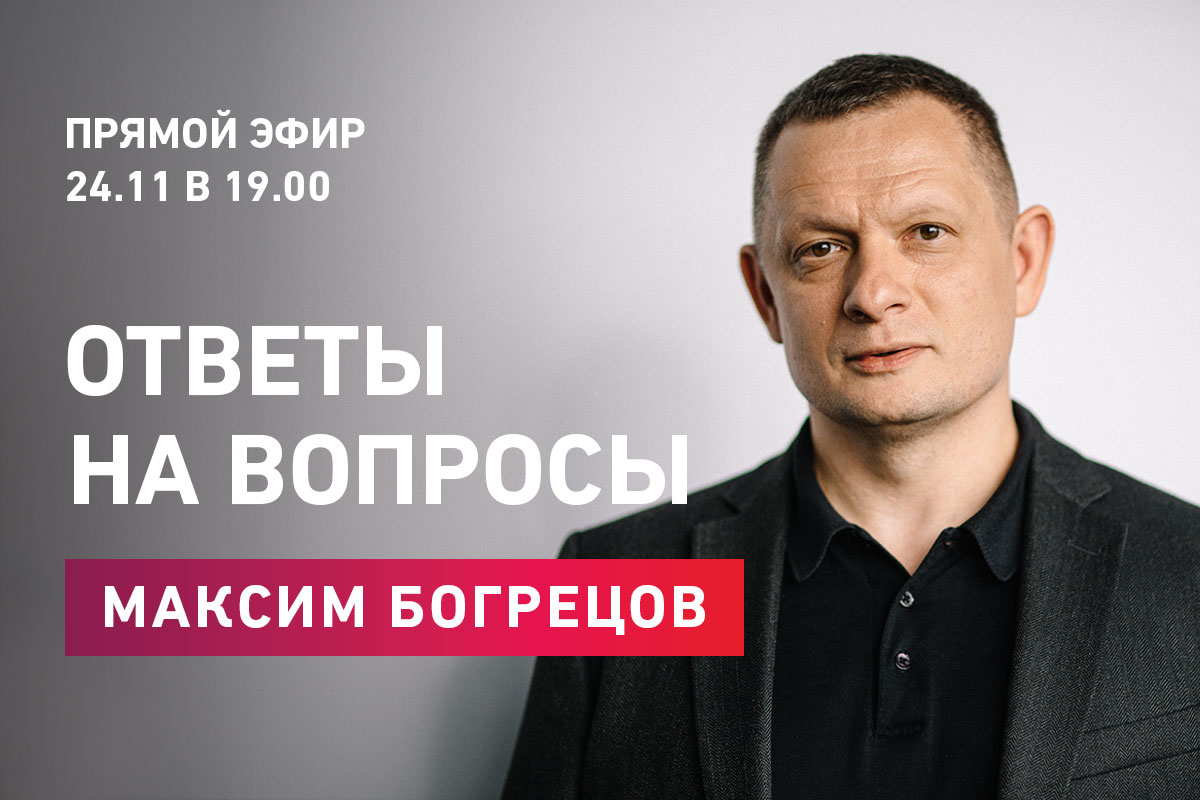 Friends, the representative of Victor Babariko’s team, Maxim Bogretsov, was broadcasting live. He answered questions about the Constitution, the judicial system, the activities of the headquarters, the charges against Victor Babariko. We prepared a summary.

About the charges of Babariko

I’ll refer to Viktor Dmitrievich’s lawyer, Dmitri Laevsky, who’s in constant contact with him. As I understand it, the position has not changed. Victor Dmitrievich pleads not guilty, the defendant pleads not guilty. He won’t plead guilty because he’s guiltless. As we know, confessions made by people in custody are very difficult to believe. We’ve already seen examples where people we know end up in jail and then we have the facts when people admit they’re guilty. We know how the system works in this case, so I would not pay too much attention to it but would focus on facts that the prosecution does not present.

Given the current challenges, I would say that, on the one hand, today both the investigator and the prosecutor can dismiss the case any day, it’s their right. On the other hand, if all the case files are examined, it is unlikely that a trial will take place this year, and that is likely to happen next year. We will hope for the best and that justice will be done quickly. The fact that these charges were brought without serious cause and that there is no objective evidence suggests that the case is likely to be dismissed.

About the interaction of the Coordination Council and headquarters

Sergey Tikhanovsky, Svetlana Tikhanovskaya, Viktor Babariko, Maxim Znak, and Maria Kalesnikava remain our leaders. These people are our leaders, our symbols, and our friends! The Coordinating Council was created and conceived as a broad coalition of different political forces that set very simple objectives for themselves. Above all, an end to violence, the release of political prisoners, and new elections that would give the country legitimate power.

There is one group of people who would like to see only the Coordination Council on the agenda, and there is another group of people who say: «What happened to your headquarters, it was our identification, and we don’t hear anything about it!» We have to understand that our coalition is a collection of colleagues, people who have come together to achieve a common goal. That doesn’t mean we’re losing our identity. In the future, when political processes are normalized, some of these politicians will work within the political system, compete or work in the same political party. That’s what we’ll see in the future, but for now, we have one agenda and we’re all working in the same direction.

Svetlana Tikhanovskaya is certainly the leader of the nation and the human who united us all. Svetlana, like Viktor Dmitrievich, Sergei, Maria, Max, gives all that she can to make Belarus a free and democratic country. Like many volunteers and our comrades, who today work in Belarus and abroad, or are in prison. Svetlana, of course, is our leader, the person who voted the majority in the election, and there is no double interpretation here.

About the organization of the Babariko headquarters

Indeed, there are fewer of us on the territory of Belarus now and it is more difficult to carry out communication. It’s not like it used to be when you could come to HQ and talk. But if you have any ideas, remember to copy them and send them to [email protected] It’s an email box that’s constantly monitored by a few people, and I’m pretty sure your idea isn’t going to go to waste. When you send someone personally to a social network or something, there’s a lot of hits, and sometimes it’s hard to process. Watch social media and our channels in case the contact details are updated. Special thanks to those who have been campaigning from the beginning and those who have filled out the volunteer form recently. We’re in the current situation because of the work you’ve been doing for months. Thank you very much!

How to staff departments in the new Belarus

There is no simple solution to this problem. For many years, people in the judicial system by definition had to be independent. Judges had to be independent of the executive, lawyers had to be able to defend their clients, and there had to be normal interaction between the lawyer and the prosecutor’s office to objectively determine whether a person was guilty or not.

None of this is happening right now. A person could be detained in the street, on suspicion, simply because he was walking down the street, under what administrative act, beaten in a car, and then given a bid for being beaten. At this level of the problem, the transition will not be easy.

But it is important to understand that the vast number of people who have been educated in the law and are now going through this experience is very charged with getting back to the positive agenda and participating in building a fair judicial system. Many such people are waiting to work.

On the other hand, the system is overloaded today. There are already rumors that we are building a new prison, and that the people who are being released are saying that it is almost impossible to find the real culprit. These are all street citizens on administrative matters. From this perspective, it may be that the burden on our system may not be as great as it appears today. There are many ways to do this, and the whole of society can work to solve this problem.

Importantly, the judiciary, even when it can simply gain independence and adequate supervision from the people, can do better. The reshuffles, big enough, have to be done. The Belarusian people now have a lot of claims against the judges who automatically stamp out the reports. All this information is being gathered. There are various projects – 23.34, a new project from the group ZUBR. All these projects are designed to objectively gather and accumulate information on what is happening. Of course, these data will be used to make objective decisions later on.

About the transit of the authorities

For power to be legitimate, we must reach new elections as soon as possible. Yes, we may have an intermediate stage, but new elections will be the moment when legitimate power can be elected. Everyone is now moving towards this point, including the incumbent.

The time of the Authority’s transit. There are not many options, and many officials will have to stay in their seats and work under some oversight body because there is no way to stay in complete limbo for a while. But those who have been in Belarus for the past few months know that the bar has now been set very low.

The level of effectiveness of State authority is now virtually zero. If you call the police, if it’s not about the flag being removed, they can ignore it.

The authorities today pay little attention to the economy, otherwise, they would have noticed that it is the violence that is now triggering the economic downturn and the economic crisis. There are many such examples now. Unfortunately, our power today is almost powerlessness, all they do is protect the streets on Sundays, completely isolated from the world community. So there’s a lot of work that hasn’t been done since August.

Many reproach us that the points about what to do are neither specific nor clear, but let us not forget that the bar is very low today. The last, the referendum must be held very quickly, because we do not want to leave the Constitution and laws that allow for the long-term growth of Lukashenko 2.0. Power without restrictions corrupts even the most honest, good, and kind people. It’s guaranteed to corrupt ordinary mortals. It’s wrong, it’s unrealistic. Power without limitations and separation of powers cannot exist in modern society. The referendum should therefore be held either on the same day as the elections or immediately thereafter, but it must be held.

About leaking the conversations of officials

Everyone has their conspiracy theories. But I do know another thing. On Sunday, a huge number of security forces came into the dormitory areas. In many courtyards, we saw an invasion of «astronauts» of different colors. It cannot leave public officials monolithic and indifferent. It can’t be. Because you see it in your yard, with your family and children. I am convinced that enough officials view this as negatively as much as most of the people. Part of the security guard is looking at it very negatively, too. I know that for a fact. And whether the flows are evidence of that, it’s hard to tell. But I believe that we should peacefully, within the law, express our disagreement with what is happening. It is bound to work.

About whether he’ll stay in Belarus and politics

No one is going anywhere until a plane in the form of a democratic Belarus takes off and supports a normal cruise control flight. And from the point of view of politicians, the main politician that I would like to see at large in Belarus is Viktor Dmitrievich Babariko. Until that happens, we don’t know what we’re talking about. When many politicians, instead of being valued for their attempts to participate in the life of their country, for their active citizenship, leadership, and willingness to lead, are imprisoned, it is not good. We’re looking forward to these people! And these are the people I expect in politics more than I expect in myself.