You understand what’s going on… 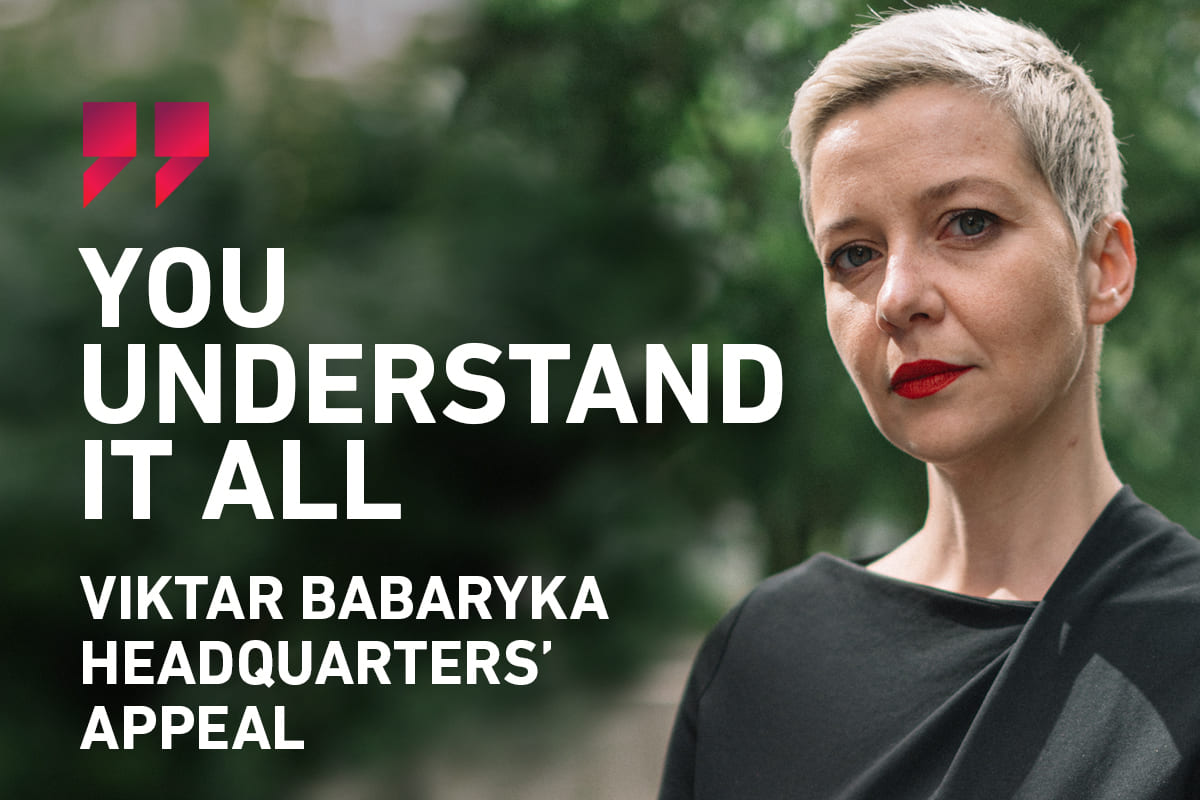 Maria Kalesnikava appeals to the people who serve the regime.

During the live stream on behalf of Viktar Babaryka’s Headquarters, Maria Kalesnikava addressed the Belarusians who became hostages of the system and who kept on saying: “You understand what’s going on”. Here is what we suggest to the people who have to serve the regime – it is time to make your choice and join the majority. Don’t be afraid.

You understand what’s going on. Everyone has their people in the state system. An uncle who puts a signature against his will to save his job at the Executive Committee. A cousin who counts votes worse than a first-grader to save her job in the secondary school. A mother who attends the parade to avoid losing her job. A younger brother who pretends to enjoy a grand opening of new fountain at the city celebration to save his job at the ambulance. While we are fighting for freedom, our people vote against it. “You understand what’s going on” – they say quietly and awkwardly. We do understand, but we want to change it. We appeal to these people today – the people who serve the regime.

You are hostages of the system. The only way to maintain it is to use fraud and deceit, to break its own laws. The only people the regime needs are falsifiers who follow orders. Every day we will remind you that you are breaking the law and are going against the majority. Every day you will see the results of your actions. Fights in the lines in polyclinics. Ramshackle hospitals with shabby wards. An old lady with 300 rubles pension who is looking for the cheapest bread in the shop. Lack of money for you, lack of prospects for your children, offensive behaviour of the authorities, confusion, and chaos. Do you want to live in such a country? No? You will have to – you understand what’s going on…

You are an experienced specialist and you started your career with the aspiration to achieve noble aims, but soon you were pointed to your place in the system. The real purpose of Belarusian state officials, state TV workers, even teachers for the ruling authorities is to prevent the system from collapsing. The Dictatorship is built on your fear. Do you think the men of power are responsible for evil deeds? The evil has no rank. The big picture consists of tiny actions. The evil triviality is to follow the inhuman orders thoughtlessly. It is when people think that they are small, and believe that their contributions to the evil are insignificant and they have no choice and agree to act against the people. What can you do?  You can protest gently and safely. You were told to vote early – “call in sick”. You were told to take a picture of your ballot – “forget” to do it. You were told to come to the voting station – go out of town. You were told to confirm that a person who quietly stood in line was cursing  – sabotage. You are getting paid so little because it is in the interest of the state that you had no money. Because if you have no money and you depend on the state, it can scold you, offend you, fire you, steal your votes, and your future. Teachers keep to their salaries and turn a blind eye during the vote count because they believe that nobody cares for them except for the government. That is not true. There are many alternatives where you can apply your knowledge and expertise, where the salary is higher, where you can learn new skills. Leave your job, tell the truth, reach out to us – we will always help any government employees. Teaching cannot be a respected profession if teachers have to lie about the vote count. How can teachers expect their students to believe in what they say if they are rigging the vote? What is the difference between a teacher who is involved in vote rigging and a student who forges marks in the class registry?

We ask every policeman, riot police officer, judge, election commission member to be honest. We are grateful to those who mustered up enough courage to oppose the humiliating system. We are amazed at your bravery and appreciate what you do. The state economy is declining while the private economy is constantly developing against all odds. Many caring Belarusians are ready to offer help, training, jobs to the people who don’t want to lie for 400 rubles per month any more. Remember a story of the paramedic from Lida, who told the truth about the situation with coronavirus and the real situation in his town. Pavel was fired, but within few hours Belarusian people raised the amount of money equal to his yearly salary. Because unlike the ruling government we need honest people. Your future employers would appreciate this. Join the majority – it is not scary. It’s scary to be a part of the evil minority, where you are now. We are grateful to you for teaching us, for taking care of our children, for protecting us. But the system that enslaves you is not grateful. It is the right time to choose. You are talented, smart, and you should be free. We are together, and together we will win. You understand what’s going on!