We are united by values that break all batons 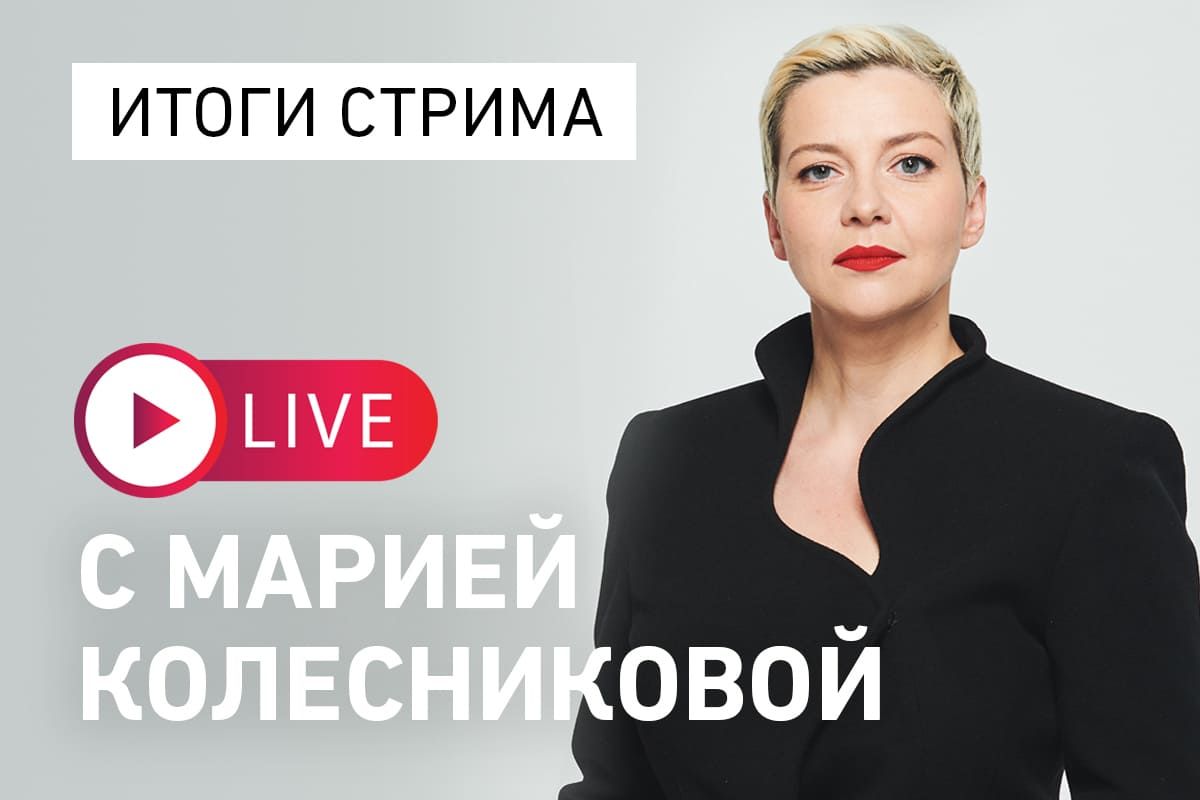 Our traditional format is back: the stream with Maria Kolesnikova! Maria turned to the heads of power structures and also answered your questions.

Read the main points of the stream:

Today I would like to address the power structures once again. I have said many times that you can take the side of good. Now I’m not talking about dismissal and leaving work. I am saying that you are obliged to fulfill the oath you gave to the Belarusian people. I appeal to the officers of the Ministry of Internal Affairs, the Investigative Committee, the Prosecutor General’s Office and the State Security Committee: we urge you to fulfill your duty to the Belarusian people and demand that you deal with all crimes. You must restore justice.

Mr. Karaev, head of the Ministry of Internal Affairs! On August 13 on the air of the Belarusian Television you took responsibility for those who got it. The death of people, violence, unprecedented cruelty and torture of civilians – everybody saw this. There are numerous facts and evidence of these crimes. We are all horrified by these blasphemous actions of the power structures. And if you take responsibility for these things, you have two options: either you resign, or you must take admission of guilt.

For all other participants of the incident there is also an option to confess. According to the law of the Republic of Belarus, all witnesses of crimes must report a crime known to them. You or your colleagues crossed the line – you killed people! You tortured them. And these people have worked all their lives, these people have paid taxes all their lives, from which you are paid a salary. You must understand that the Belarusian people will not forget and will not forgive this violence.

I appeal to Mr. Noskevich, Chairman of the Investigative Committee, Mr. Konyuk, Prosecutor General of the Republic of Belarus, and Mr. Vakulchik, Chairman of the State Security Committee. I appeal to you. You see and know perfectly well about all the facts of these crimes. You swore an oath to the Belarusian people. And your duty to the Belarusian people is this: you are obliged to initiate criminal proceedings on the facts of these crimes. I submitted applications containing at least 16 clauses of the Criminal Code, according to which these cases can be initiated. The facts indicated in these statements are publicly available and we are all witnesses of these terrible facts of state violence against civilians. We know that an interdepartmental commission has been established to investigate these crimes, but it only makes sense if criminal cases have already been initiated. Victims or their representatives must be present on these commissions. We believe that murderers and sadists must be detained and an investigation must be conducted about who prepared them to kill, who prepared them to shoot their people, who taught them to be sadists and who gave them orders to torture and rape civilians. I remind you: the milestone has been passed; people have been killed and maimed. It is your responsibility to investigate these crimes.

Another important point: from May to August, you are obliged to investigate all the actions related to the election campaign. All these performances with precinct commissions, with vote counting, with the non-admission of observers, with the detention of candidates – there are dozens of these facts, and they are all well known. Are these actions, as well as the subsequent facts of violence, attempts to hold on to power with “blue fingers”, or rather:

What do we have now? There is a person in whose interests you are acting, or they want you to act in the interests of that person. But you need to understand exactly: you did not take the oath to him. You took the oath to the Belarusian people. And now it is in your power to investigate these crimes.

The next fact: the President of the Russian Federation Putin on August 27 publicly said that the President of the Republic of Belarus Alexander Grigorievich appealed to him for help, which consisted in interfering in the internal affairs of the state. What does the Criminal Code say about this?

Today was a very difficult and very wonderful day. Today there was a women’s march and I was lucky to be present at this march. I have seen thousands of beautiful women. Thank you very much for this, you really inspire me, you give me a lot of strength. I know how important it is for us in these difficult times to be together and support each other. You are incredible!

How long are you willing to fight together? Are we going to the end or is there a limit?

We will fight until victory. I think no one has any doubts about our intentions. Right now, for the first time in 26 years, we understand how strong we are and how we, Belarusians, are united in our desire to change the horror in which we were. We want a new, free country, and each of us is ready to build it, ready to sacrifice something and ready to go to victory.

Do you think that the scenario with strikes at large enterprises did not work?

I don’t quite understand what is meant by a scenario. What I saw are decentralized initiatives that have spread across all important factories in Belarus. And everyone chooses the form of disagreement in which he is ready to express it. It is important to understand that the government wants to crush any forms of disagreement, including strikes. But the legal default has already happened! Now we are in a deep political crisis when the authorities refuse to listen to the majority of their people and to engage in the dialogue. We understand that the economic crisis is approaching us, the Belarusian ruble is falling. And if in 26 years there were no strikes and workers did not use all possible tools during them, now it is clear that with all the totality of crises, defaults and their economic consequences, workers will have to be heard.

Is a peaceful rally capable of pushing the authorities to dialogue?

I believe that a peaceful rally and chains of solidarity, and women in white dresses with flowers, and singing in shopping centers – all these seemingly small things are actually big steps towards victory. For 26 years we have not had such a consolidation, such solidarity with each other. We were very afraid and any step that each of us takes on a daily basis is truly a feat. We all stopped being afraid, we step over our fear, we unite, we see how many of us are. And this varied and long-lasting protest is exactly what the police state cannot deal with, because they have neither the strength, nor the resources, nor the imagination to fight it. In recent months, we have seen how creative Belarusians are, all these protests and actions are decentralized – and they are taking on a form that has never been seen before!

Why Putin and Lukashenko lead us to change the Constitution of the Republic of Belarus so obsessively, presenting it as a concession. What’s the catch?

When we talked about the amendments to the Constitution, there were two important points that are key for us: changing the terms of the presidency to two maximum and the separation of powers, in which the role of parliament is greatly increased. Now it is impossible to imagine that current president was interested in having two terms and increasing the role of parliament. With the increasing role of parliament, impeachment becomes possible, and this is exactly what he is very afraid of. Therefore, all the talk about the new Constitution, about the fact that something can be changed, about the possibility of creating new parties – this is manipulation in order to calm us down, appease and once again mislead us. But we understand that this doesn’t work at all, and we don’t believe a single word or any concessions.

How the work of the Joint Staff is financed, we are tired of speeches about US and European money.

The Joint Staff no longer exists. On August 9, the day of elections, its existence ended. Now all the work is being done within the framework of the Coordination Council. As for money, I can say specifically about myself: on May 12, I became a part of Viktor Babariko’s team, and we had this rule: everything we do is volunteer work. So none of us has received and is not going to receive money for everything we do. This is a unique example, but only motivation, not some kind of monetary reward, brought us together very strongly. I would like to speak separately about European money. A few days ago there was a statement by the representative of the European Union that they are allocating 53 million euros for Belarusians, including the Coordination Council, so that they distribute this money. I want to say that neither I nor the Coordinating Council has ever asked anyone for any money, including the European Union. We are not going to have anything to do with them and we are not going to distribute them. We learned about 53 million from the EU from the media. We did not ask for this money and we are never going to have anything to do with it.

Here in Belarus we are in such a situation that we ourselves, on our own, can cope with any situation. There were a lot of initiatives that were in no way connected either with the headquarters of Victor Babariko or with the Coordination Council. This is assistance to factory workers, to those who suffered during detention, and assistance to those who lose their jobs. All these initiatives have arisen independently of us, we know about them, just like you, from social networks. And we support all these manifestations of solidarity of Belarusians who are ready to help each other. Many thanks to those who show both solidarity and initiative, collecting money and help to those who need it.