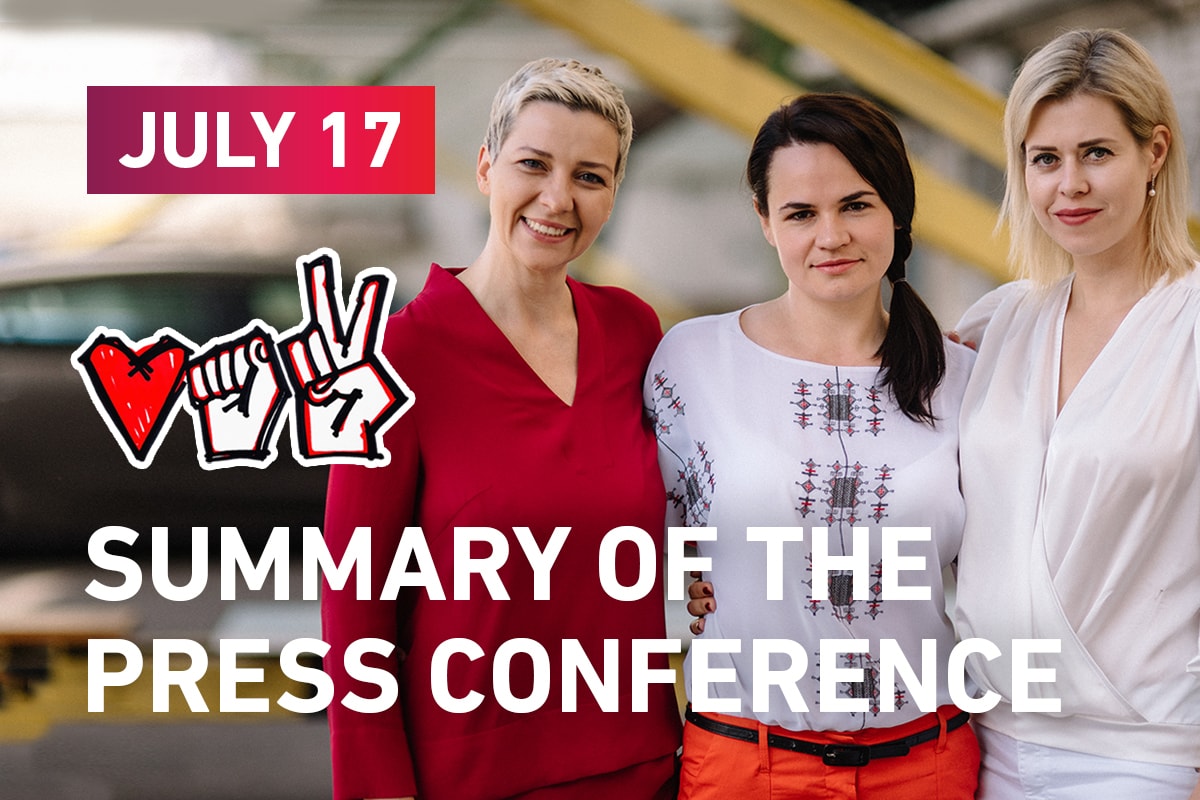 Svetlana Tsikhanouskaya, Maria Kalesnikava and Veranika Tsapkala held a joint press conference on July 17, explaining why they have decided to join forces, how the campaign is going to continue and what all Belarusians should do on August 9. Here are the main points from the press conference.

How are the three campaigns going to work together?

We have not merged our campaign headquarters, just joined efforts. One day ago, the three campaigns – those of Viktar Babaryka, Svetlana Tikhanouskaya and Valery Tsapkala – announced their 5 principles of cooperation.

The five basic principles of our election campaign are:

All the candidates who are currently in the presidential race can join us and show their support, so that together we can achieve our main goal – to bring about the transition of power in the country. Andrey Dmitrieu, for example, has already expressed support for our initiative to join forces. We are open for dialogue. We also counting on the support of every Belarusian. And we know that the majority is on our side!

In the meantime, our Headquarters is going forward with our attempts to get Viktar Babaryka registered as a presidential candidate. All our appeals and complains so far have not yielded any positive results, but we do not want to lose time, so we have decided to go ahead. If Viktar Babaryka does get registered, we are going to continue our cooperation on the basis of the 5 principles we adopted. Viktar Babaryka has been saying from the very beginning that we should unite in order to achieve our main goal.

Are the campaigning activities going to continue?

Yes, we are going to support Svetlana Tikhanouskaya. Campaigning events will be organized in every regional city, as well as in district centers. Do not forget that every citizen of Belarus has the right to campaign and disseminate information among his or her acquaintances, colleagues, and friends.

What should we do on August 9?

Our goal is to mobilize people so that they express their civic positions at the polling stations on August 9. It is up to every Belarusian citizen to decide how they want to protect their votes.

How do we ensure that elections are fair?

Maria Kalesnikava: “The most important thing for us at the moment is the support from people. We are asking Belarusians to join forces with us and with each other and to work hard. Our greatest enemy is not the regime, our enemy is thinking “well, nothing is going to change anyway”. Instead, we should all be thinking “I can change everything”. It is better to now do everything we can rather than sit on a couch listening to jolly tunes from the “Slavianski Bazaar”, saying goodbye to your last hopes for a life in a free country. Imagine how proud we are going to be, how we are going to tell our children that we achieved the goal of our lifetimes – we set ourselves and our country free. We are all different, but we all have a common fundamental need to be free, to live in prosperity and to be treated by state authorities with respect. Every day we urge all Belarusian to start working on achieving our common victory”.

Svetlana Tsikhanouskaya: “It was the right decision to join efforts. It made us even stronger. We are not doing anything bad or illegal, we just want to have a peaceful and dignified life, and we no longer want to have the regime we have at the moment — just like most people. I am grateful to Belarusians for their support. We really need your help, as we can succeed only if we are in it together”.

Veranika Tsapkala: “The government has in a most shameless manner blocked the strongest players from taking part in the elections. We have decided to join forces to show what female solidarity is. We want to make sure everyone knows that the Constitution is indeed for women, that we are not second-rate citizens, we can stand our own ground just like men, and we are going to win”.