The plan that no one likes — but one that works 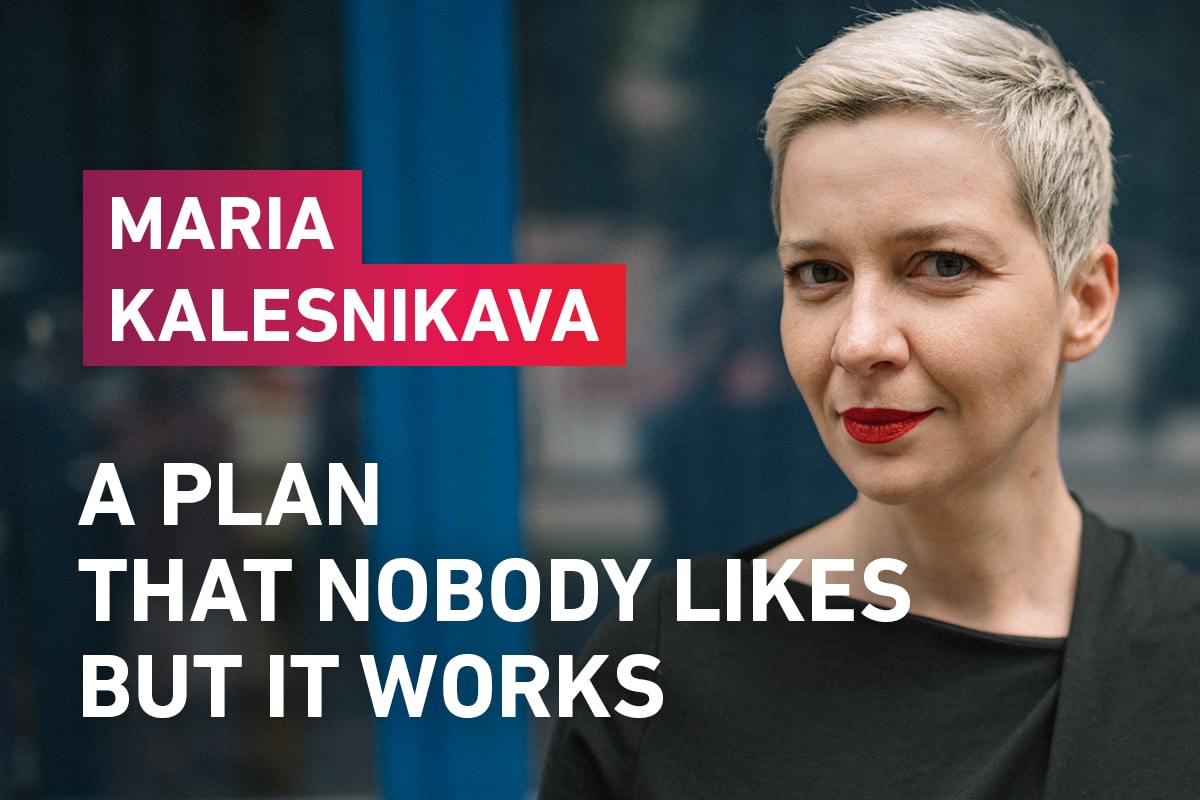 Maria Kalesnikava put forward a statement during the live stream explaining the plan that is going to lead Belarus to change.

You can find answers to users’ questions about the three headquarters joining efforts, campaigning together and white bracelets here.

Social media is buzzing with questions: is there really a plan, who assessed the risks and how, how do we win, what to do next, is it possible to change the regime at all, to boycott or to take to the streets? Answers are there, but few people notice them, and many don’t really like them.

This has never happened before — never.

The country has come to a unique situation.

The government began to lose support, people grew more and more dissatisfied. It all started with the coronavirus. It affected almost every single locality in the country. People began falling ill, many died. However, the authorities picked a different path, and this caused outrage. Discontent with those in position of power mocking dead people, being boorish and failing to do what they should quickly spread across the country.

People’s incomes started to decline. The state made a point of refusing to help. The problem is not only in job cuts, falling exchange rates and rising prices. In border regions and regional cities, cross border activities are the staple of gray economy, and now that the borders closed, people’s livelihoods were devastated.

Role of the Internet increased. In absence of any real information on coronavirus, Internet became the main source of information. The TV monopoly in the regions and towns was undermined.

For the first time in the history of the country since 1996, the majority of people are no longer silent. People who never cared, who almost never went to the polls, are now interested in politics. This majority is mostly comprised of Belarusian middle-class people, of those who have something to lose. So they started to lose it.

The authorities quickly caught wind of the civic activism ahead of the elections. Siarhei Tsikhanousky personified the clear and immediate threat to the regime. Street protests is what the regime had been preparing for. So, an easily anticipated and obvious move followed: he was quickly removed from the political arena.

The current authorities and the traditional opposition are prisoners of stereotypical thinking. This thinking is inherent in our educational system and the Soviet-era upbringing. With the revolution of 1917 used as a sacred symbol, everyone was led to think that in the absence of fair elections a change of power could only be brought about by taking to the streets. Not many people are now persuaded by statistics that prove that a change of power is more likely to be brought by nonviolent actions. However, not many people trust any sort of statistics in this country.

Let us shift the focus back to Belarus. It suddenly turned out that, while the government was dealing with one opponent, another one, much more dangerous, slipped right through their fingers. This other opponent was Viktar Babaryka, a surprise for political strategists and other people of special trades: a banker, rich, working in a Russian-owned bank, plump and ineffectual — a really weak figure in the eyes of state authorities, Even Valery Tsapkala, a strong figure with an IT background who came from within the system, looked much better.

However, the image of Viktar Babaryka proved to be unexpectedly appealing for the previously apolitical majority, especially contrasted with the statements and active threats from the authorities. Love against threats, decency against rudeness, sincerity against lies and fake statistics, efficient management against outright economic failures. Calling for peace versus threats of war and a Maidan-like revolution. The image of an intelligent, smart man started quickly gaining popularity across the country, thanks to the increased power of the Internet.

Belarusian political scene is now abuzz with wild speculation about the “mysterious” plan of Viktar Babaryka. The plan, however, is extremely simple, and despite being very simple, it works. It is rooted in a clear understanding of how the Belarusian state works and what it is based on. No theories, just practice.

State power in this country does not rely on law enforcement or on the army, SWAT teams or KGB. State power relies on huge numbers of intimidated, poorly paid Belarusian state employees. How are they managed? The most important story here is the fear and, what’s more, the prospect of losing. State officials and teachers, policemen and doctors are afraid that if they lose their job, they will become irrelevant and lose their already not too high salaries. So that is why they go on carrying their not-always-so-legal orders and continue propping up the state using shameful methods.

Because of fear, the state machine is working worse and worse. Have you ever wondered why the statistics on COVID-19 are so bad? Or why, despite its rigid hierarchy, the Ministry of Health does not know if hospitals are stocked with everything they need to fight a pandemic? The ministry says that the hospitals have everything they need, while in fact they gladly accept any help they can get from volunteers, since there is not enough of anything. Do you think it is because the Ministry is afraid to admit to this? No, it happens because the country has no real statistics at all. State officials are afraid of losing their job or going to jail, so they will not report real statistics to their superiors.

Everyone who has ever dealt with state authorities of any level knows that the main goal of any official is to avoid making a decision, to shift responsibility and to avoid doing anything they may be punished for. In this country, one can be punished for anything, even for the most practical decision. After all, oversight and law enforcement agencies in this country have absolute power, so in the end the whole country has just one person sorting out potatoes, and the government apparatus is deteriorating slowly. All that is left is fake productivity, so that nothing would change even if 90 percent of state institutions were cut. In order for the government to work people need to be able to do their jobs.

How to change power

The Belarusian society has no tolerance for violence, not even hints of it. So, under these conditions, the change of power in this country would be an arduous, but a very real story.

The government depends on people who are afraid of everything and on the previously silent majority which gives this government legitimacy in the eyes of the former. How do we undermine this support?

Why are elections important and what do we do?

They are important because we need to use every opportunity to show that we are the majority. The headquarters have no illusion about the elections being rigged. As far as we understand, that happens in three major stages.

The first stage is early voting. The less people voting early, the less votes for the current government. Early voting is a great way to get plenty of time to substitute ballots in favour of whoever necessary.

The second state is votes tallying and ballot stuffing on voting day. It is much easier to throw in a ballot for someone who failed to show up, and much more difficult to substitute a ballot. Therefore, boycotting does not work. If you do not come, you make like easier for the fraudsters. So you need to come and help observers make it impossible to rig elections. If one member of the commission breaks down, the others will follow.

The third stage, where all problems become final, is the tallying of votes in territorial electoral commissions. That is why we need observers who are going to record everything at the polls and photograph the final protocol. It is going to be uploaded on the web and tallied, so it is going to provide an election result that is closer to the real picture – an alternative tally. So members of territorial election commissions are going to think: is it worth go on cheating, or should the CEC take the responsibility for this.

Why it may fail

There are many challenges on the way. It takes a long time. The process might not end with elections, so people will have to go on expressing their opposition for a long time afterwards. Will they have enough patience and energy?

This only means that everyone must take part, and they must be the majority. We can only believe in ourselves and in other people just like us. It is much easier to believe in someone else – a leader, the headquarters, the EU, Russia, USA, think that someone will come and change it all. But no one will come. And opposition only works when you have enough people opposing.

It is tiresome. It is much easier to boycott, give up, make yourself up to be the smartest person in the room and do nothing.

The regime can manage “Ploscha” (the street protests), but it has nothing against a long-term, consistent and varied protest by the majority. So it has two options: either to organize reforms and give people access to government, or become an overtly police state, with a minority opposed to the majority, without all the pickets, CECs and the rest of political charades. But it takes courage to introduce reforms, and it takes money to turn the country into a police state. This regime has neither.