The Photoreport. We were at Svetlana Tsikhanouskaya’s Rally 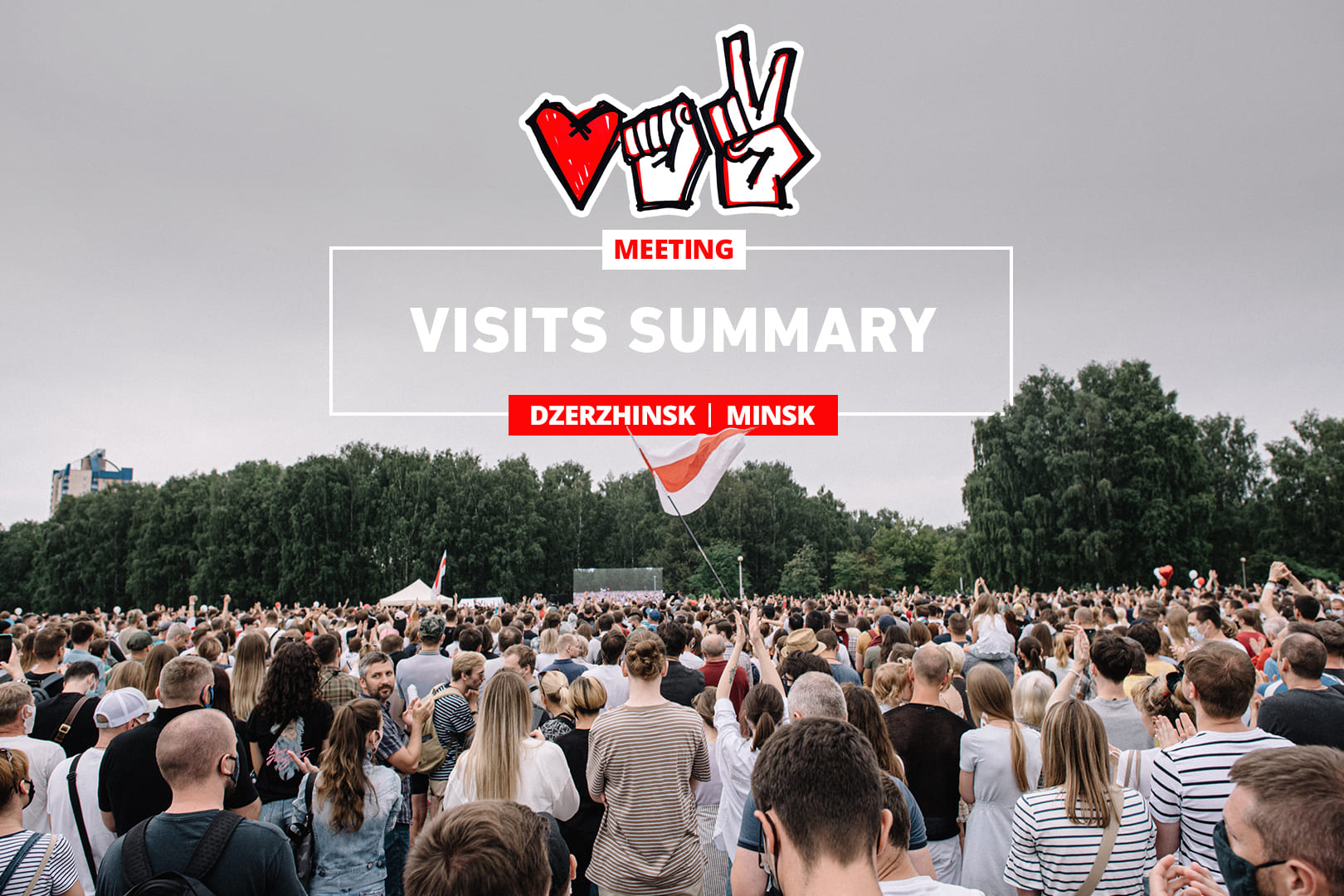 Friends, on July 19 we participated in rallies of presidential candidate Svetlana Tsikhanouskaya in Dzerzhinsk and in Minsk. Thank you very much to everyone who came, you are incredible! More than 7,000 people gathered in Minsk in the People’s Friendship Park!

And this is just the beginning. We are not going to stop.
Come to the polls on August 9th. Become observers. Talk about the real situation in the country to friends, relatives, neighbors, and encourage them to speak in return. Share information.

See our photo report, be inspired and remember that together we win!

What did they say at the rally?

Belarusians are tired of humiliation by the authorities, tired of the mess and deceit. Look around, Belarus has really woken up: there are lines and pickets all over the country, almost a million signatures for alternative candidates, thousands who want to join initiative groups and be observers, dozens of civil servants who openly and publicly started telling the truth. People write complaints, people show the authorities that it does not suit them, people beat their neighbors away from riot police.

“Continue to show your opposition to the authorities. It so happened that in Belarus, citizens use legal methods, while the authorities use violence. Don’t be afraid of physical threats. Do not be afraid of riot police and police vehicles. “Avtozhak” is just a car, riot police are just people, many of whom are trying to evade the order and not touch their own Belarusians. Walking the streets, you are not doing anything wrong and illegal. These streets are for us, no matter how many times they are blocked”, said Maria Kalesnikava.

Veranika Tsepkala stated that today all the Belarusian people are facing a historic choice:

“Either we continue to live for the next 5, 10, 15, 20 years the way we live, when the authorities use our taxes on the purchase of residences, aircraft, cars, sports events, the purpose of which is not known to anyone, or we will all go together to a new Belarus, where Belarusians will live with dignity ”.

White is the color of changes!

Veranika Tsepkala urged all the changes’ supporters to come to the polling stations on August 9 with white bracelets:

“Now I have a white bracelet on my wrist. It can be made from absolutely simple and affordable improvised means. It can be a piece of white cloth, a bandage, just paper, like mine. You will make such a bracelet yourself in two minutes. White means purity and change. We urge all those who are against the current government to come to the polls so that you have such a white bracelet on your hand. Thus, we will see that we are the majority ”.

Who to vote for on August 9?

We call on every Belarusian to come to the polling station on the main voting day – August 9 and support Svetlana Tsikhanouskaya.

“Svetlana is not only a strong and heroic woman, Svetlana is our ticket to a happy and free Belarus. Svetlana’s victory is a guarantee of our liberation. After the victory of Svetlana Tikhanovskaya in the elections, we will hold new fair elections with the participation of Viktar Babaryka, Sergey Tikhanouvsky, Valery Tsepkala and other alternative candidates. The elections – where your vote will be counted and not thrown into the trash”, said Maria Kalesnikava during the rally.

Svetlana Tsikhanouskaya stressed during her speech that

According to her, the support of the Belarusians instills in her confidence to go all the way.

“I love my husband, so I continued his work. I love my children, so I want them to grow up in a country where people are not silenced. I love Belarusians, so I want to give them the opportunity to choose. Yes, at first I was scared. I know how far the authorities can go trying to keep their chair. But now I’m not afraid. I feel your support and your strength. It is my duty to be in this place now, my duty to help make us and our children free. I, Svetlana Tsikhanouskaya, want to become the President of the Republic of Belarus and I will not give up my intention ”.