Rally in Barysaw: love cannot be forced; neither can presidency 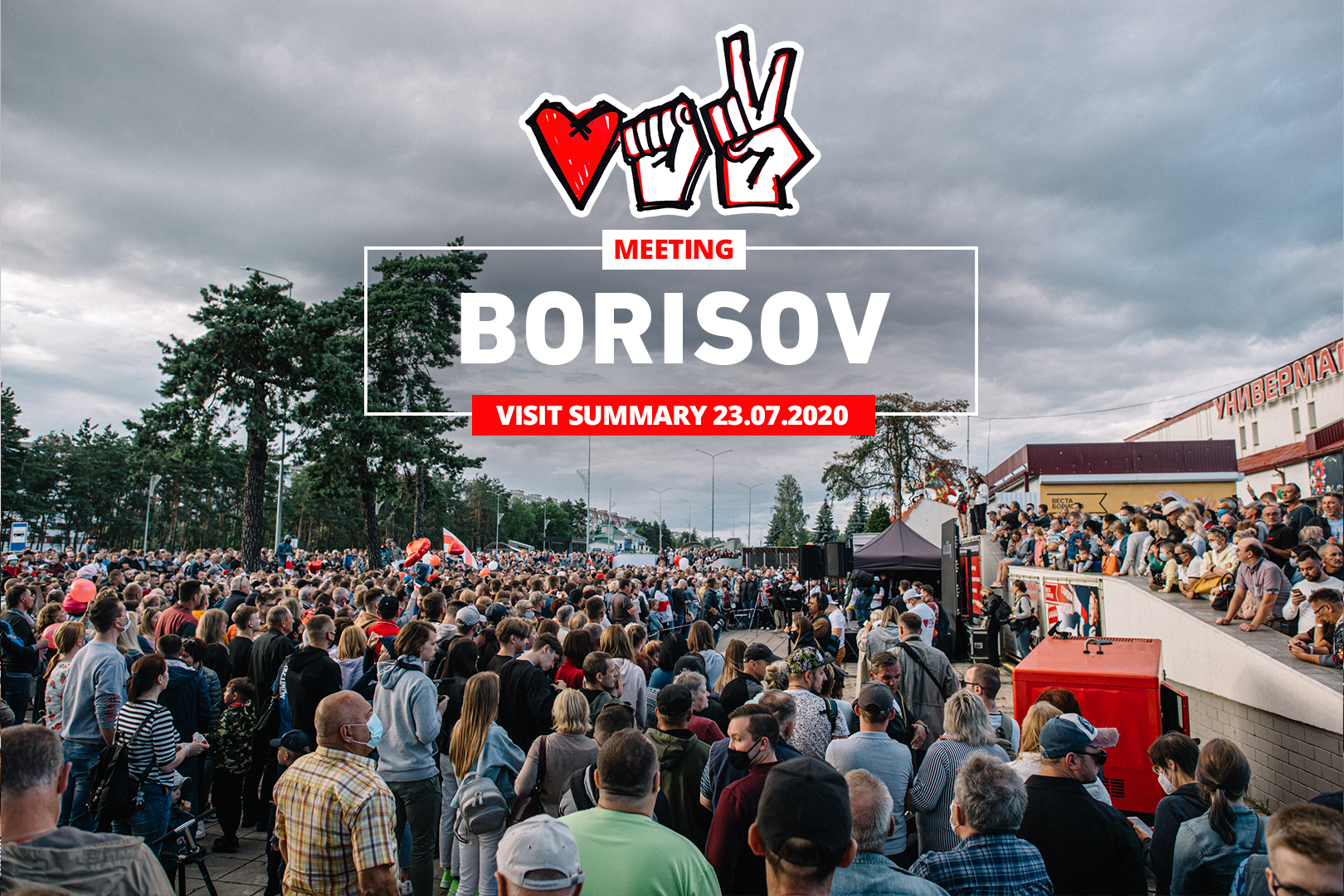 Sviatlana Tikhanouskaya’s rally took place in Barysaw today! Maria Kalesnikava, representative of our headquarters, also took part in it.
Dear residents of Barysaw, thank you for being numerous, for being sympathetic!

these are the main points of the speeches.

Hello, dear residents of Barysaw! I am very glad to see your shining faces here!

My dream is that my husband Siarhei Tsikhanouski would stand beside me on this stage. But he was thrown into a disciplinary cell for his beliefs; and my children keep asking when their dad is coming home. It hurts. But it hurts even more to see the state which the regime has brought Belarus and the Belarusians to. That is why I’m here.
My name is Sviatlana Tsikhanouskaya, I am the presidential candidate of the Republic of Belarus.

One year ago, my husband Siarhei Tsikhanouski created the “Country to Live in” (Strana dlya zhizni) project. He travelled around the country, met people of various professions and listened to the people in villages and small towns.
Siarhei and his project impressed the people, but scared the authorities. When Siarhei decided to run for president, people formed lines all around the country to leave their signatures in his support. Then there were provocations from the authorities, humiliation and arrests, registration denial. The authorities acted in their usual manner and thought to put an end to it. But they did not realise it was just the beginning. Right?

My programme is not conventional for a presidential candidate. The main point of my programme is to hold new, fair and just election with participation of all the alternative candidates who were denied registration, thrown in prisons, who were attacked for their attempt to run for President and make living in Belarus better. It is my goal and the goal of all the Belarusian who want to live in a free, rich country! For 20 years, we have had fake election without a choice. I have come here to change it. It is my fate; it is our common fate.

For the fair election to happen, we need to unite.
I am now calling for you: under no circumstances vote early, come to the election on August 9, vote for me, Sviatlana Tsikhanouskaya, and protect your vote. Why do we need it?

Barysaw is a city that must flourish and grow. People in cities like this should not live worse than in Minsk. People from Barysaw should not want to move to the capital. They must enjoy their lives in their native city.

There are a lot of enterprises in Barysaw, but the authorities won’t make them efficient. There are many industrial plants in the city, but their workers’ salaries are low. A lot of beautiful people live in the city, but they live worse than they should. Is that normal? Is that right?

Barysaw should be the country’s industrial pride. People working at the enterprises and doing their jobs well should not be imprisoned, their salaries should be raised. Now the salaries rather resemble pittance in exchange for obedience. Pensions resemble alms. The authorities pretend to raise pensions, but what can one buy with that raise? A couple of loaves of bread?

Is that what we wanted for ourselves, for our children and grandchildren?

How many people were infected with coronavirus in Barysaw? The authorities are concealing the numbers! They must take care of our health, but they accuse us of falling ill! Have you had enough?

All we want is safety, wealth, respect and freedom. We have nothing from this list and we won’t have anything until we change the government all together.

After taking the post, I will take measures to keep stability in the country and to hold the fair election. All the necessary steps will be made within six months.

We now have two ways: keep living in poverty and unfulfilled promises or to build Belarus we deserve! We, on our own can do a lot. We create jobs while the state puts spokes in our wheels; we bring up our children and cultivate proper values in them. Together we can create a rich, safe, developed country.

We build the country not only for ourselves, but for our children. I want our government to care about the health and welfare of the citizens. To treat us with respect, not to violate our freedoms and rights. The acting government can’t do that. But there are other people willing to: we, you, all of us!

I love my husband, so I continued his work. I love my children, so I want them to live in the country where people are allowed to speak. I love the Belarusians, so I want to give them the opportunity to choose. Yes, I was scared at first. I know how low can the authorities fall in their fight for keeping the post. But I’m not scared any more. I feel your support and your power. It is my duty to be here now. It is my duty to help make ourselves and our children free.

If, just like me, you are tired of empty promises and problems, if you want the worthy and safe life for yourselves and your children, under no circumstances vote early. Come to the voting stations on August 9 and vote for me, Sviatlana Tsikhanouskaya. I am an ordinary person, an ordinary Belarusian, a woman, a mother who wants and can make our life the one we deserve. Let’s build the country to live in together!

I remember how several years ago, me and Siarhei were having a walk in Barysaw. Back then, I could not imagine standing here, in front of you all, and Siarhei being imprisoned. I was happy back then. But you know, I am happy now, too. I am full of hope you’re giving me and full of strength you’re giving me. I love you all!

The authorities are now trying to bring us against each other. They are saying that the military should be ready to strike, suppress, apply force. The question is: against whom?

The authorities are saying that the military should solve their problem, the President’s low rating. The President must earn high rating by taking care of his people, not by force!
Enough with force, love can’t be forced. Neither can the presidency.