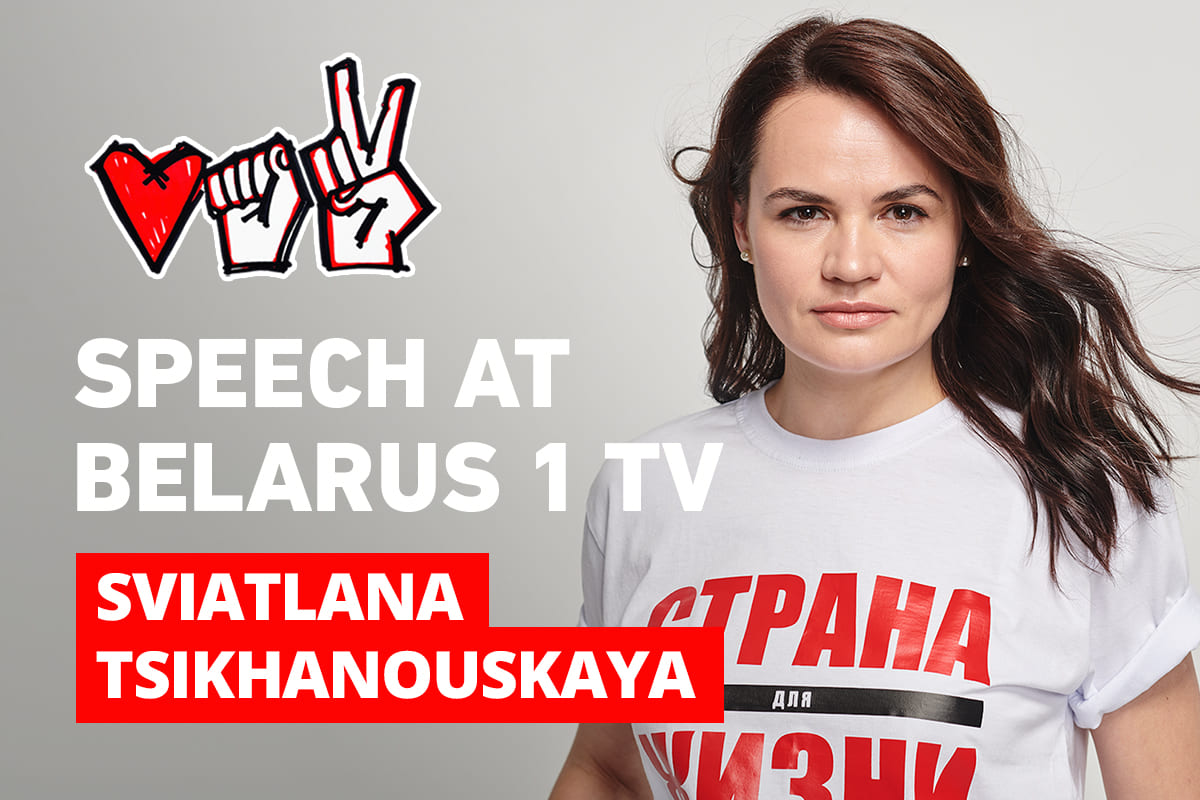 Sviatlana Tsikhanouskaya delivered a speech on Belarus-1 TV channel today. You are welcome to read and share with friends!

Dear Belarusians! This is the address of the presidential candidate Sviatlana Tsikhanouskaya. I will tell you who I am, how I got here, what is wrong in our country and how can we change our lives. I am not a politician; my husband Siarhei Tsikhanouski wanted to become the President and now he is in prison.

I am 37 years old, I hold a degree in teaching and philology. I worked as a secretary and a translator, I am fluent in Belarusian, Russian and English languages. My husband Siarhei Tsihanouski is in the detention centre because he wanted a better life for the Belarusians; my children keep asking when their dad is coming home; and I want to become the President to restore justice in this country.

One year ago, my husband Siarhei Tsikhanouski created the “Country to Live in” (Strana dlya zhizni) project. In this project, he covered corruption and mismanagement, he met people of various professions and travelled around Belarus speaking with people in villages and small towns.Their stories were filled with pain, disappointment, a struggle to understand why they live so poorly. Those were candid stories about the conditions the majority of the Belarusians live in while their government is multiplying palaces, planes, houses in Drazdy.

When Siarhei decided to run for president people formed lines all around the country to leave their signatures in his support. The “Country to Live in” project and Siarhei impressed the people but scared the authorities. Then there were provocations from the authorities, humiliation and arrests, registration denial. The authorities acted in their usual manner and thought to put an end to it, but they did not realise it was just the beginning.

I have made the decision to continue my husband’s work and register as a presidential candidate instead of him. The authorities have not registered Siarhei Tsikhanouski and other strong candidates, Viktar Babaryka and Valeri Tsapkala, but they’ve registered me. Why? Because they feel threatened by these men. Yet they are mistaken; the candidates are not the threat for the authorities. The people are, who are tired of humiliation and not being free. My husband Siarhei Tsikhanouski together with other candidates woke the Belarusians up; and they will not return to sleeping which was so convenient for the authorities.

I will not promise you anything; there are other people for that. They have for 26 years made empty promises. They have spoken about good pensions, about salaries “of 500”, about work, proper healthcare, but they have never kept any of their promises. I will tell you what is really happening in the country; things you will not see on TV. I will tell you the truth.

What you won’t see on TV is that the people caught by the riot police were peacefully walking the streets doing nothing wrong. Yet it is true.

What you won’t see on TV is that the absolute majority is against the acting authorities and wants a new president. Yet it is true.

What you won’t see on TV is that the Belarusians are begging the teachers and everyone forced to count the votes falsely not to agree to commit this crime. Yet it is true.

What you won’t see on TV is that much more people have died of coronavirus than the official statements of the Ministry of Health say. Yet it is true.

What you won’t see on TV is that the government is rude and abusive. Yet it is true.

What you won’t see on TV is that the political prisoners are imprisoned for their beliefs, not because they have committed a crime. Yet it is true.

What you won’t see on TV is that the healthcare workers were short on face masks and the ordinary Belarusians collected money to get them. Yet it is true.

What you won’t see on TV is that the alternative candidates were imprisoned because the majority supported them. Yet it is true.

The TV is now owned by only one person in this country that is why everyone watching TV will never know the truth.

The reason I have joined politics is not power, it’s justice. My main aim is to hold a fair election involving all the alternative candidates. By voting for me you are voting for the new fair and just election. It is the only way the country can move forward.

I have accepted support from Viktar Babaryka’s and Valery Tsapkala’s teams; we have the best experts working with us, public organisations, parties. We have created a strong team to lead Belarus to the free and happy life. I am certain the majority of our citizens want it; that’s why I count on your support and engagement.

My programme is not conventional for a presidential candidate. The main point of my programme is the new, fair and just election.

For this election to happen, we need to unite. I am now calling for you to become an independent observer, come to the election on August 9 (not during the early voting) and vote for me, Sviatlana Tsikhanouskaya, and to protect your vote. Why do we need it?

The authorities need to understand that we are the absolute majority and that we will not stand aside.

We need to get the record-high number of observers in the history of the independent Belarus and to record the actual results of voting. There are many initiatives for that: Honest People, Right to Choose, Rukh Prauda, Zubr and others; we should join them. The higher the turnout, the more difficult it is to steal your vote. The higher the turnout, the more obvious the rigging will be.

After we have the election results obvious for the whole country on August 9, 2020, everyone will have to respect the people’s choice; otherwise we will have to protect our votes.

The upcoming election on August 9 will not be fair and free. None of the powerful leaders were registered as the presidential candidates: criminal investigations were opened, hundreds of thousands of signatures collected were thrown away.

We need the new fair and free election with transparent vote counting.
We also need to change the system so that the power would not be in the hands of only one person.

After taking the post, I will take measures to keep stability in the country and to hold the fair election. All the necessary steps will be made within six months.

Just think about it: for the first time in 20 years, fair election can take place in Belarus. The real election, not a fake.

I don’t like it that young people have to leave small towns and villages because they have nothing to do there, nowhere to work and can’t provide for themselves.

I don’t like it that the Belarusians have to leave their country to earn because they have nothing to do there, nowhere to work and can’t provide for themselves.

I don’t like it that villages die out while they could thrive and live worthily.

I don’t like it that there are only the retired left to live in small towns barely making ends meet.

I don’t like it that people are dying of coronavirus while the authorities conceal the real numbers of the infected, impede the provision of proper medical assistance, pay no decent salaries to the healthcare workers.

I don’t like it that the officials build large houses for themselves and travel to expensive resorts while we barely make it to the next salary.

I don’t like it that we’re being intimidated by businessmen while the richest people in Belarus are those in the government.

We now have two ways: keep living in poverty and unfulfilled promises or to build Belarus we deserve! We, on our own can do a lot. We create jobs while the state puts spokes in our wheels; we bring up our children and cultivate proper values in them. Together we can create a rich, safe, developed country.

We build the country not only for ourselves, but for our children. I want our government to care about the health and wellbeing of the citizens. To treat us with respect, not to violate our freedoms and rights.

I want our children to have a good education, healthcare, to find good jobs, make families and have their own places to live. I want them to stay and live here, on their land, not to leave looking for a freer and fairer country.

I want us to feel love and respect, to have the right to choose and to be proud of our country to live in.

I want Belarus to be respected in the world; to make friends, not enemies.

I want the infamous tradition of persecuting people for the truth to be left in the past.

I love my husband, so I continued his work. I love my children, so I want them to live in the country where people are allowed to speak. I love the Belarusians, so I want to give them the opportunity to choose. Yes, I was scared at first. I know how low can the authorities fall in their fight for keeping the post. But I’m not scared any more. I feel your support and your power. It is my duty to be here now. It is my duty to help make ourselves and our children free.

If, just like me, you are tired of empty promises and problems, if you want the worthy and safe life for yourselves and your children, under no circumstances vote early. Come to the voting stations on August 9 and vote for me, Sviatlana Tsikhanouskaya. I am an ordinary person, an ordinary Belarusian, a woman, a mother who wants and can make our life the one we deserve. Let’s build the country to live in together!