Rallies in Orsha, Mahiliou, Babruisk: We need no paramount leaders and cosmic plans, we need ourselves 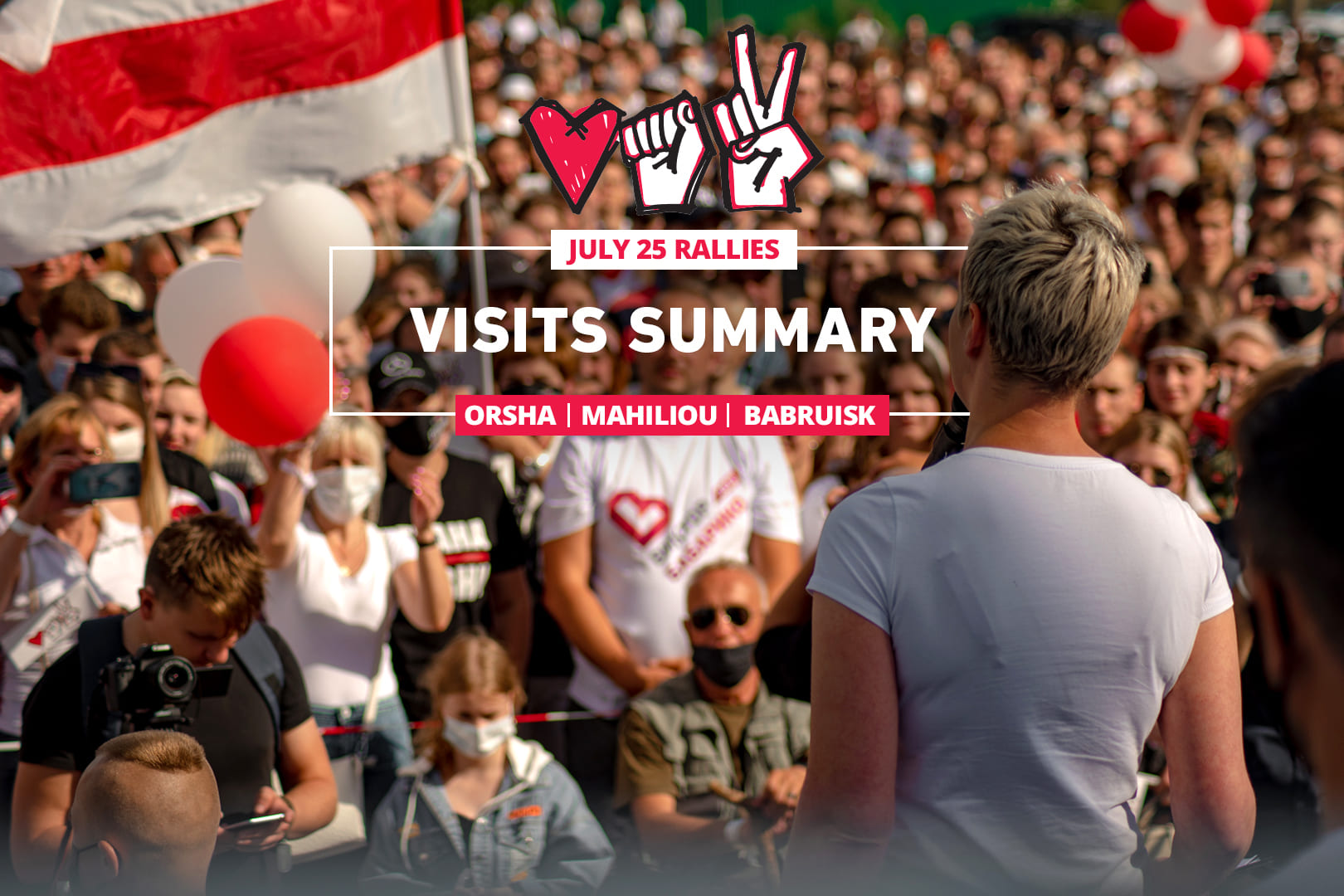 Dear friends, today, on July 25, Sviatlana Tsikhanouskaya’s rallies with participation of Veranika Tsapkala and Maria Kalesnikava took place in Orsha, Mahiliou and Babruisk. It was such a delight to see so many people! A whole stadium was filled in Bobruisk. And we won’t get tired of thanking you for being together!

These are the main points of the speeches.

Just overnight, on my own without consulting anyone, I have made the decision to take Siarhei Tsikhanousky’s place. I’ve collected and submitted the documents to the CEC to be registered as a presidential candidate of the Republic of Belarus.

Three candidates, three strong men were removed from the presidential race just because the authorities got scared of them. The authorities saw a threat in them. But they did not think that the candidates were of no threat, the people are! Our unity! This year the people have felt themselves the nation! Not scattered individuals, but the proud and independent nation!

Three streams of people supporting three different presidential candidates united and formed one enormous stream of the people’s anger with the system. We did not unite for Tsikhanouskaya, we united against the acting regime.

Belarusian cities have suffered from coronavirus. One second it exists, another it’s gone – depending on how it suits the regime. Real figures of the infected and the dead are concealed from us. Yet we know these figures are several times higher than the official ones. And the Ministry of Health itself might not know the real figures. Local officials are so intimidated that they simply do not send the actual reports to their superiors. It results in the mess. It results with chaos! Everyone is scared of everyone and noone wants to take responsibility. Though it’s good a lift was finally installed in the 11th polyclinic. In the city where the lifts are produced!

The woodworking complex in Mahiliou is a brilliant example of how the private business does great in the area the state failed. There could be more examples of this, yet the authorities won’t let us Belarusians work in peace!

Why is it important to show disagreement with the authorities now? The authorities respond to our right for appeal with refusals and runarounds and call the riot police. It should, however, inspire us. We must keep pushing the authorities using all the legal methods at our disposal, we should express our opinion, show them we disagree. Each runaround letter, each improper performance of duties by the officials, each attempt to falsify the election on August 9 will be recorded and made public. Each case of breaking the law will not vanish or be forgotten!

Belarus annually loses about 40,000 of its citizens who leave the Belarusian cities and relocate to other countries. Just think about it: in 25 years of the regime in power, we have lost 750,000 of our citizens which is the population of Mahiliou and Viciebsk combined. We must stop this!

Birth rate in our country is in a dramatic decrease. Just think about it: last year, Belarus reached another anti-record. Last year, the number of babies born was equal to the number born in 1945 when the whole country was in ruins. We want to change it with Sviatlana’s help!

The acting authorities have shown their real face during this electoral campaign. I was forced to relocate my children from Belarus because I understood that the authorities wouldn’t stop and would blackmail me using my children. They are using any methods even falling so low. They are using our children! Shame on them! Shame!

The authorities were surprised and shocked to see the people lining up to sign in Sviatlana Tsikhanouskaya’s support who was very little known back at the time. I understand that almost everyone was signing in Siarhei’s support, but he wasn’t there; Sviatlana Tsikhanouskaya was. However, it didn’t stop the people. They saw my husband behind me. And the authorities got scared of these lines. They understood that the people want changes, they want to live in a changed country!

I have special feelings for Babruisk. Because when Siarhei called everyone to the anti-parade in Babruisk, he got arrested and was imprisoned at the moment. Despite that, you pursued the idea while your leader, your hero was arrested. You self-organised and held a great anti-parade. Babruisk and the people who managed to come to Babruisk from other towns, you managed to consolidate, gather together and show you’re united. You did it, Babruisk!

First of all, I want to thank the machinists of Babruisk Clothing Factory “Slavianka”. You made face masks for the healthcare workers, you worked restlessly and supported this country in its difficult times. You are the heroes. Thank you!
The acting President visited your factory. But did he thank you? No, he didn’t! He didn’t thank you, he gave instructions. The acting authorities do not thank its people. They know no love to its people. They know no carrot. They only remember the stick from the saying.
The authorities meet us with their unhappy faces, they make us think we are doing everything wrong. Only it’s the authorities that are doing everything wrong.

I have read, Babruisk, that the acting President had called Babruisk, and I quote, a hell-hole. And had said that the Babruisk jews took no care of it. Another abuse from the authorities! So many different names have the authorities called us in these 26 years. We won’t take it any longer. Babruisk is a beautiful city!

They say that expecting from a promise a lot we must wait for three years. Three? How about 26? For 26 years, we’ve had the groundhog’s day with empty promises. Belshina workers live in fear expecting optimisation and, therefore, dismissals. The authorities have turned Babruisk into a typical Belarusian city: people living in fear, an unprofitable factory and an ice palace. Only we don’t live in the Snow Queen fairy-tale! Our life is the story of liberating from the authorities only holding its post through intimidating everyone.