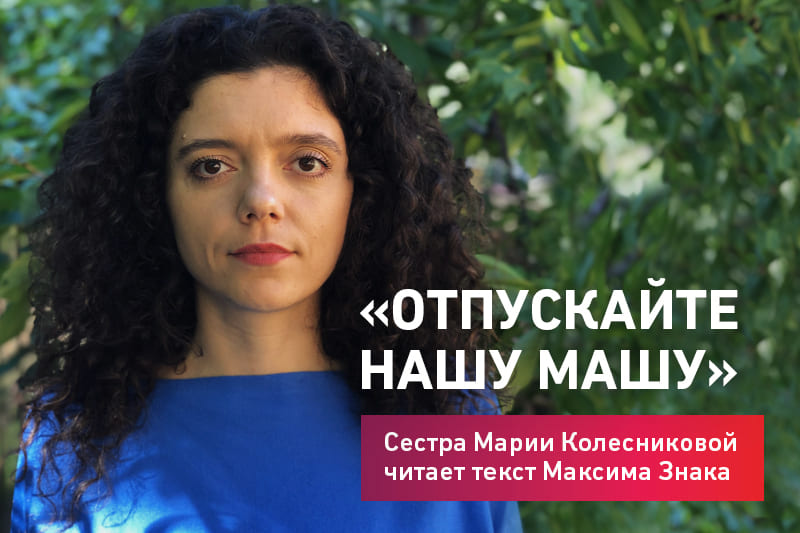 “Release our Masha!” – Maxim Znak was supposed to say this phrase. At the moment when masked people were breaking into Viktar Babaryka’s headquarters, Maxim was recording a video in support of Maria Kalesnikava. He was interrupted … But he managed to send the text of his appeal. And today we will be the voice of Maxim!

On Tuesday, September 8, at the border history was made. One day this story will make it into the textbooks.

What right does it give? What kind of protection does it provide? Citizens of the Republic of Belarus are beaten, tortured, kidnapped, and detained for no reason. You gave Masha a passport, and Masha showed what you did with this passport.

What rules did she break to warranty a detention? And if you want to fully understand what happened, although you probably already know, watch the press conference of Anton Radnenkou and Ivan Krautsou.

I know exactly what Masha was doing when she was left alone in the cell, in the room, I don’t know where you kept her. I know for sure that she went to bed, she always does that. She was gaining strength to be ready for long conversations with those who would come … in order to …. hammer at them with a smile! With sincere words and open eyes. Masha protected all of us from bloody scenarios of the future. Masha reassured Belarusians. Over and over again she repeated that it was necessary to act in accordance with the law.

Why don’t you follow the letter of the law. Let go of our Masha. Think about how many mistakes you’ve already made. Admit at least this mistake. Apologize for the first time and release our Masha!

I ask all those who care to record at least a couple of words on video – let the people who hold Masha understand that Masha needs to be released urgently.

We call on all Belarusians to record videos in support of political prisoners!

Friends, now it is very important to give a voice to all political prisoners. You can record your videos and talk about them, write letters to them, draw posters, put their photos on avatars on social networks. The voices of the majority cannot be deadened. Only together we can win!