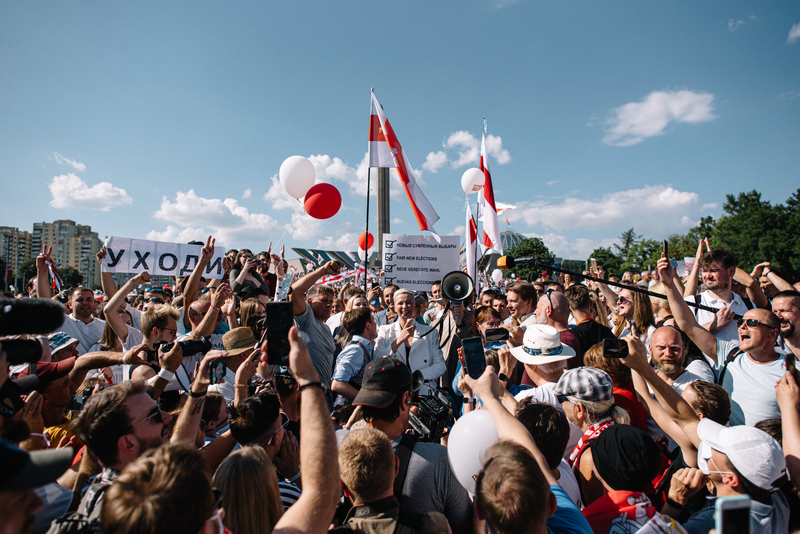 Today Maria Kalesnikava spoke during a peaceful rally in Minsk.

Look at how many of us are here!

Thank you for expressing your disagreement. Thank you for going on strike. We cannot stop. Disagree until change becomes a reality. Belarusians – we are more than incredible.

I appeal to plant and factory workers, to employees of state television, bureaucrats, diplomats and law enforcement agencies. This is your last chance: fight your fear and join us. We will support you.

Love is stronger than fear!!!

Yesterday we said goodbye to Aliaksandr Taraikousky, who was killed in the street. Today we paid our last respects to Aliaksandr Vikhor, who died after being detained. He did not receive the required medical assistance. Those involved in the violence are yet to be punished, not a single criminal case has been opened. Detained people are still waiting to be released from prisons.

It won’t be like this. It won’t work that way.

Tomorrow we will file a complaint to initiate a criminal enquiry into the death of our people. Into the instances of abuse and illegal actions of law enforcement agencies. Everyone who used violence against demonstrators and passers-by on the streets, in paddy wagons and in police departments and pre-trial detention centers must be held accountable in accordance with the law of the Republic of Belarus.

We demand freedom for all political prisoners, as well as those detained at peaceful rallies and protests. Viktar and Eduard Babaryka, Siarhei Tsikhanouski, Pavel Sevyarynets, Nikalai Statkevich, Ihar Losik, and 4,000 people remaining in prison must be released immediately!

A compensation should be earmarked and paid out to all the victims of security forces.

Our principal demand is the following: the former president must resign. 26 years of nightmare must end. He drowned the country in violence.

Numerous violations have been recorded. Your real votes have been registered. Honest and decent people appear in the media and talk about the facts of administrative pressure and falsification. Thanks to everyone who did an honest count of votes. However, the elections were not fair. The former president is not only the main threat to the Belarusian people, but also a threat to the country’s independence.

Belarus is an independent state. The sovereignty of Belarus is not a matter of trade or discussion. Belarusians will defend their country from an encroachment on its independence as bravely as they are currently fighting violence committed by the current government.

The regime is ready to do anything to stay in power.

The events of the last week have scared the current government. Its rattling jalopy is falling apart.

We will not rest until the current criminal government resigns and Belarus becomes a free country.

Together we will win!