Like Daenerys Targaryen: how Sviatlana Tsikhanouskaya took control of the dragons in two weeks. Report from behind the scenes of the joint campaign headquarters 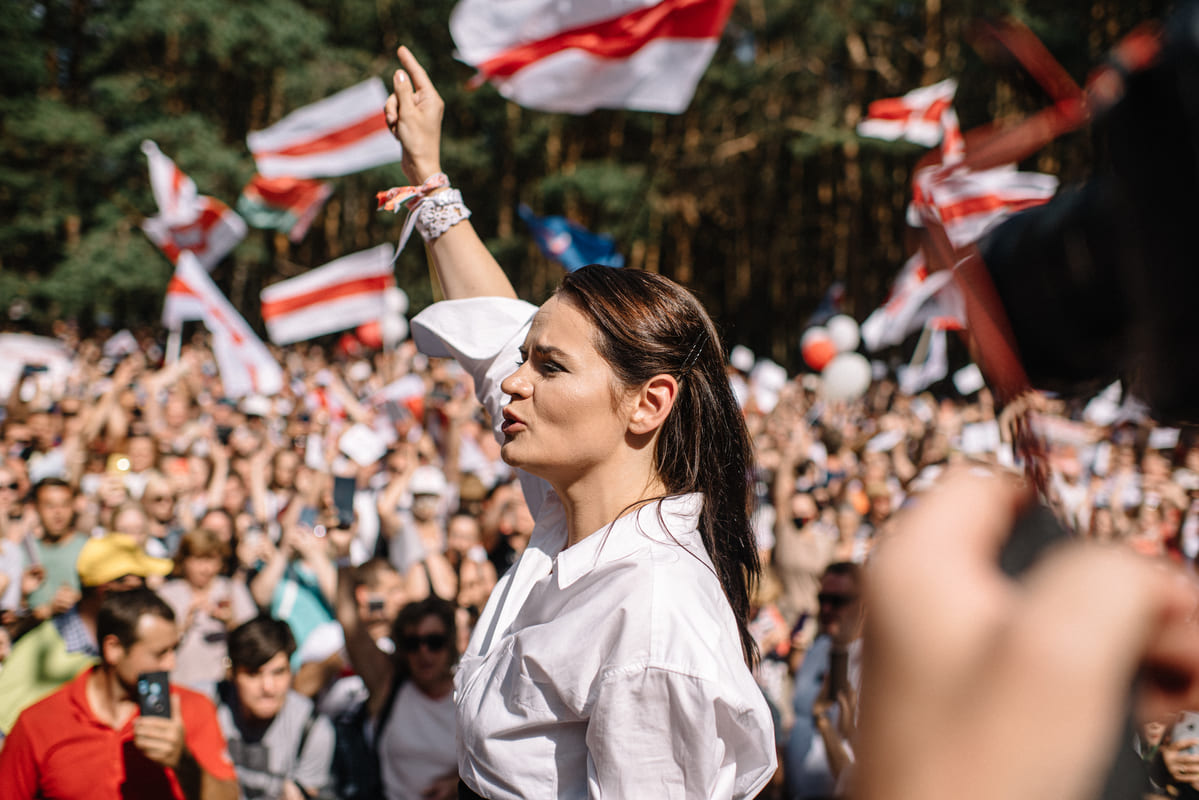 Artsyom Harbatsevich, who traveled all over Belarus in Tsikhanouskaya’s caravan, writes that the scale of Aliaksandar Lukashenka’s betrayal by the local executives will become apparent only after the election. The material is reprinted from the Nasha Niva website.

Two months ago, an inconspicuous woman, trying to avoid any attention, quietly filed an application with the Central Election Commission. Journalists referred to her simply as “Tsikhanousky’’s wife.”

She answered all the questions succinctly and reluctantly; Lukashenka’s telegram channels rushed to mock her for a “lack of charisma” and inability to speak. Yarmoshyna registered her application only to create the appearance of competition during the elections.

But, having taken a leap from the kitchen into the politics, for the past two weeks “Tsikhanousky’s wife” has unintentionally ridiculed the profession of personal growth coaches. Last week, I took my first trip with the campaign team. There I noted that Lukashenka’s opponents come to the rallies, each with their own reason for not liking this government, and Tsikhanouskaya is just a symbol of change for them.

During the second trip to the west of the country, my impressions changed a bit – I saw a glimpse of real love for Tsikhanouskaya.

In Lida, people broke through the guards to hug her. In Vaukavysk they endured cold rain, but waited, in Brest they lost consciousness from the heatstroke, but endured, in Slonim they confessed their love, in Baranavichy they brought icons and bread with salt, elsewhere they gave her their children to hold.

It seems that the only other local politician who has previously lived through the same experience was Lukashenka in 1994.

By and large, Tsikhonouskaya is seeking power under the same problematic circumstances which the country faced in the 90s: the economic crisis, low confidence in the authorities, the inability of the majority to influence political decisions.

She is also opposing the administrative resource, which is not brimming with creativity.

The next generations view the knowledge of the ruling elites as backwardness. The electoral sympathies for Lukashenka are based on inertia and old merits, which are already becoming obsolete and their description begins with the words “once upon a time”. Hence, the appearance of a new politician here is a breath of fresh air, and everything new automatically becomes popular.

During the two intense weeks of campaigning, Tsikhanouskaya herself has changed beyond recognition. She has discovered public speaking and is able to sense people’s emotions and respond to them. She speaks without referring to notes on paper. She was applauded by 60,000 people in the capital, 20,000 people in the regional center, and 5,000 people in the district center. She shows how a person who has rejected fear can change.

It seems to me that Kalesnikava and Tsapkala are slowly receding into the shadows, although they still speak with a heartfelt conviction.

I also understood what gives strength to all three of them.

Tsikhonouskaya really loves her husband and the people who followed him. Kalesnikava truly hates the regime; she is revolted by the mention of Lukashenka. Tsapkala is realizing her political ambitions: most likely, she was the one who convinced her husband to run for presidency.

The political context hasn’t changed: Tsikhanouskaya continues to promise only what she can do – to hold re-elections and bring back the old Constitution. This way she avoids the awkward questions.

And the ideologically united campaign headquarters continues to argue that the ruling authorities are incapacitated and are in minority. Although the authorities seemingly make up the entire visible layer of the society, in fact they only represent a thin film of oil in the sea. This is an interesting political trick, which was previously used by Lukashenka although from a different angle.

Here one must be careful in assessments and statements, as a small company of like minded internet friends could create the illusion of public opinion.

In all truth, I hold the view that the transformation is taking place throughout all segments of society. This is demonstrated by the number of signatures for alternative candidates, number of people showing up at public rallies, and by the number of registered votes in the “Voice” voting control system. It is enough to board any train and listen to the conversation.

An alcoholic, a worker, a teacher, a military, and a businessman in any town begin the conversation with the following: “Were you there?” And it is immediately clear to everyone what we are talking about.

Hefty men listen to her, shout “Sveta” and wipe away tears – what is it if not a complete dismissal of Lukashenka’s statement pointing that a woman cannot become a president?

I spoke with a 30-year-old car mechanic, standing next to me in Brest. For a decade he’s been consumed with his trade and haven’t looked beyond the walls of his service station. But today he says: “I will vote for Tsikhanouskaya, because there is no one else.”

I think he says so not only because Lukashenka is yet to present his electoral program, a week before the election. This bloke has vast experience of observing what not to do, and this is a valuable experience that prompts political choices.

There is no point in rehashing many conversations I’ve had with people outside of the major urban centres. These conversations boil down to the list of well-known arguments which are already hanging in the air. There isn’t anything new to add here.

One question I did ask was about “Russian militants”. I got different answers, but in a nutshell, most agreed that the stories shown on state TV were fabrications trying to connect the pieces of truth that could have taken place.

And how can there be trust after the stories about the “White Legion of Black Souls”?

Of course, people are also tense. They are all awaiting August 9, realizing that the campaign’s statement about “having to defend our votes” is a euphemism, which may result in something gloomy if the authorities fail to honestly count the votes. And it appears that the authorities will fail.

However, according to some campaign representatives, this year the betrayal of Lukashenka is happening on an unprecedented scale – they are contacted by people from the authorities, election commissions, who are ready to share information and do everything in good faith. Let’s see if this is true and what it will turn out to be.

And I also do not understand whether Lukashenko will be able to stifle the supporters of Tsikhanouskaya. The regime is facing a problem: a significant portion of those who will be ordered to beat Tsikhanouskaya’s supporters, would have also voted for her. “Beat” is not the word spoken openly, but the authorities mean it, expressing it to the public in non-verbal language of visits to military units. Will these orders be executed?

It should also be noted that for the young people the image of Tsikhanouskaya is superimposed on a familiar pattern: three students from Vaukavysk compared Tsikhanouskaya with Daenerys Targaryen from the “Game of Thrones” – a faceless woman who lost a strong husband, but took control over dragons and conquered the world.

In this case, the remaining question is who does Daenerys Tsikhanouskaya consider to be her dragons? It seems that these are the people from the Babaryka’s team.

Volunteer work at the campaign headquarters is, indeed, an interesting phenomenon, worthy of a separate publication.

Thousands of volunteers joined Tsikhanouskaya, eager to contribute their skills and time for free. The volunteer database was formed by people responding to a questionnaire on Babaryka’s campaign website.

I met some of the volunteers. For some time I was driven around by a fellow from the State Control Committee, who is proud that his memo led to a dismissal of the Governor Barys Batura. In different cities, I was hosted by a bank employee, and a regional businesswoman.

On another occasion, a fellow who volunteered to drive the journalists was a relative of Lukashenka’s regional aide. He earns a living with a specialized seasonal trade, and has free time in the summer. By the way, this Andrei went to the rallies with a red-and-green flag.

One woman, director of a Minsk based company, traveled with the campaign from Friday to Sunday and helped coordinate food and settlement for volunteers: “You have to win, because I have something to lose.”

There are men in the security service whom you world ordinarily see guarding Minsk business centers: they took time off to help the joint campaign headquarters.

In Hrodna, local boxers and wrestlers with broken ears circled the stage.

Photographer Pavel Krychko, who shoots weddings in Europe for a crazy price, came home to shoot all of Tsikhonouskaya’s rallies for free, because “media photographers capture the event, and people do not always look beautiful. I want people to look beautiful, to show that they are full of light. ”

Volunteer service coordinators say that at any given time more than 2,000 people are available to help.

These volunteers, cheering themselves up, muse : “She dared, and she has transformed, then what can I accomplish if I dare? And a system based on the power of many minds is stronger than the system that relies on one”.