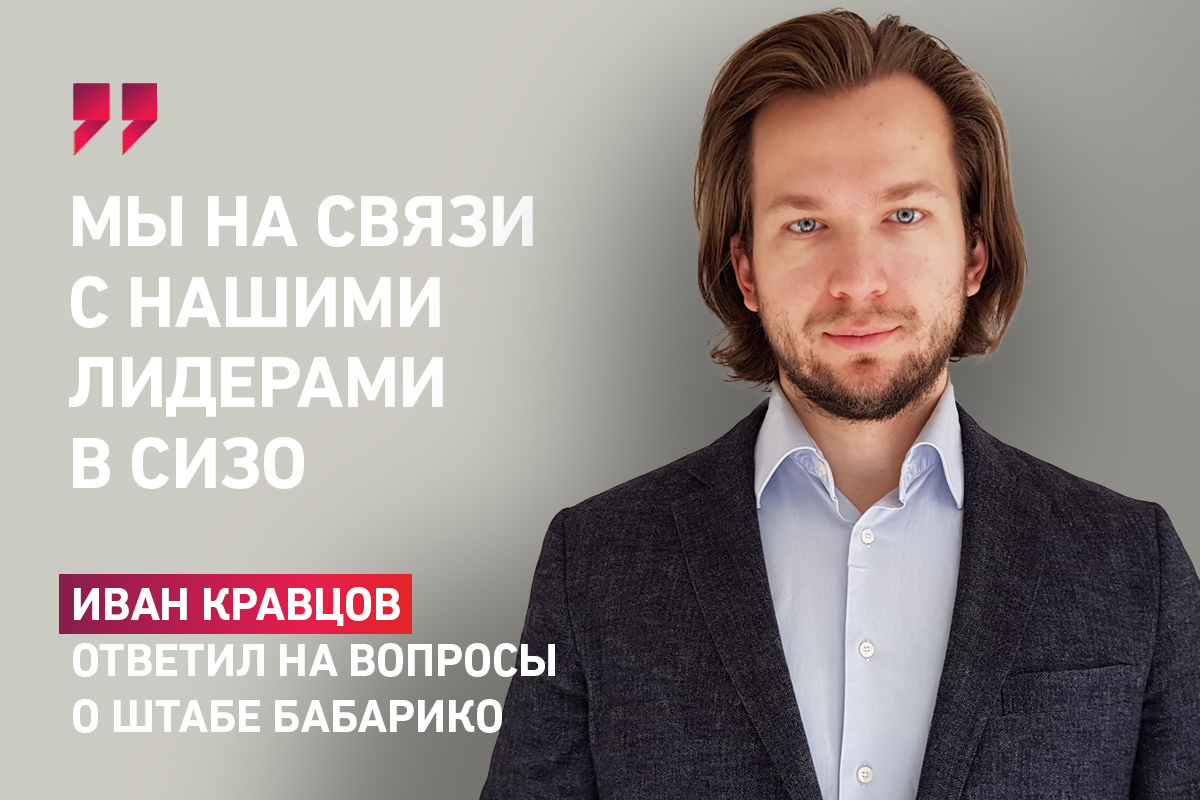 On January 19th we were broadcasting live. This time, Ivan Kravtsov, the representative of Viktor Babariko headquarters, was on duty. The main thing on the air is that we continue the work, the work plan, join us, and read the summary of the live broadcast.

We’re at a difficult stage – a lot of people are tired. And the greatest danger is to be disappointed and devalue the progress we have made in the summer and the fall. Sometimes it seems that the authorities feel quite confident and keep everything under control. But long-term processes work in our favor. We are inevitably caught up in global technological progress, and more people are realizing that the current model of power is obsolete. It does not ensure effective economic development, creative processes, or human capital development.

Let’s see if this gathering is enough for 2,000 people to “turn the page”. Without real actions, without contact with society, without discussion of how we will come out of this crisis together, there will be no progress on this issue.

We keep working. It should be remembered that Victor Babariko, Maria Kalesnikava, Maxim Znak, Victor’s friends, Eduard Babariko, and the volunteers who are in prison, are still on the same team. We know their position on what’s going on. They know our position. And it’s very important to be persistent and consistent.

Headquarters, where are you?

Our headquarters was badly damaged before and after the election. Our top leaders and many campaign volunteers are in prison. We are working in two cities now. Part of the team is with me in Warsaw, part of the team is together with Maxim Bogretsov in Minsk. Our entire core team has inextricably linked its work to political or parapolitical activities.

Almost 20% of all cases related to so-called unauthorized events have been collected. On behalf of Victor Babariko, we organize the political party. The entire core team, about 20 people, is still working. The basis of Victor Babariko’s support is not only the campaign headquarters but also two to three hundred volunteers who worked on the collection of signatures and more than 8,000 members of the initiative group who did all the work in the collection phase.

What are the expectations and views on the upcoming trial of Victor Babariko?

We are convinced that both Viktor Dmitrievich and all political prisoners are innocent and that their cases are politically motivated. The defense completed its review of the case on January 16th, and at this point, the lawyers do not see any basis for the prosecution against Babariko. After the transfer to the prosecutor’s office, the case can be there for 15 days. After that, other investigative actions will be assigned. After that, the case must be brought before a court within two months.

We were promised that the trial would be open to all and that the case file and the outcome of the trial would be made available to all. I Will see if this promise will be kept. Certainly, the trial of Victor Babariko will be one of the important events of the year. And we’ll see if we’re being told the truth and if it was worth holding a man who raised the country for six months and not letting him use his power for the good of the whole country.

How are things with the political party?

We discussed a permanent structure for permanent work with Victor Dmitrievich before his arrest. He announced in his video, which we had prepared beforehand, the creation of a social movement, and in our view, this is absolutely necessary. The success of civic engagement must be institutionalized. The situation in Belarus is enormous right now. And it is important to understand the moment when we can move to the format of the organization. But in general, it is necessary to create an organization that will reflect the agenda of Victor Babariko, follow its principles, and according to them improve our country.

It’s important to pick the right moment. But the idea of having to develop a party is good because it helps to accumulate a resource. And the human resource and the resource of civic engagement will be crucial..

Do you check the members of the headquarters team, are there any double agents?

The key headquarters team hasn’t changed since May. In those seven months, we have no reason to believe that any of its members could be compromised.

How does Victor Babariko’s headquarters interact with the headquarters of Svetlana Tikhanovskaya, NAM, and the Coordination Council?

Our joint campaign with Svetlana was initiated by our headquarters. In many ways, the Coordination Council has been established on the basis of our headquarters. Therefore, part of the work of our team is aimed at supporting activities, including those of the CC. Our leaders are now in Belarus, in prison, Maxim Bogretsov is in Minsk, and the main staff of the CC – 40 people – is also in Belarus. We believe, as a matter of principle, that without internal action any structure, policy, or initiative has very limited prospects and possibilities. So we’re very focused on what’s happening in Belarus.

The Babariko headquarters is still a separate structure, we have no problem discussing the agenda with Svetlana’s headquarters, the NAM. We are supporters of teamwork, and we stay in touch when necessary.

Is the headquarters involved in drafting the Constitution with the Anatoly Lebedko Public Commission?

As early as November, Maxim Znak articulated three conditions under which he was prepared as a lawyer to participate in the drafting of the Constitution:

We have a team of lawyers at our headquarters, which was previously led by Maxim Znak, and we were working on the issue of constitutional reform back in June and July when Victor Dmitrievich announced the referendum initiative.

We have our vision of the agenda for this referendum. But simply drafting a constitution without understanding how to use it afterward makes no sense to us. In the event of a referendum, there is a need to prepare proposals and try to submit them. If the authorities refuse, then it makes sense to try to initiate our own referendum. Each action should therefore be linked to specific legal scenarios and understandable actions. There may be many opinions, but that will not replace the constitutional process. The only way to amend the Constitution is through a referendum.

How to uphold the spirit of the struggle?

Unfortunately, there are no wonderful recipes here. Now we have a test of patience, and I cannot say anything new compared to what we said in the summer.

We must continue to express our disagreement in all legitimate ways, to maintain a high level of civic activity. The society sincerely fell in love with the brightness and activity of Belarusians and, of course, connects its plans with public or political activities. All the events and news today are the result of what happened this summer.

The 2-3-year timeline scares me, but it’s important to understand that all our leaders who are in prison are determined to go to victory. The way we conduct our work this year will determine much of their fate.

How to get into the campaign team?

We have a special form on the site, we’re always looking for volunteers. We have a lot of partnership projects: 23.34 – crime data collection project, politzek.me – political prisoners project, where you can look at all information about them, make friends with them, perform certain tasks. Go to the site, sign up for the form, and get to work. Headquarters is still running, we’re not stopping, there’s a work plan.

Address your questions to the official mail of our headquarters [email protected], subscribe to our social networks and channels, you can always contact us and ask us a question. There are forms for volunteers. We’ll be in touch.